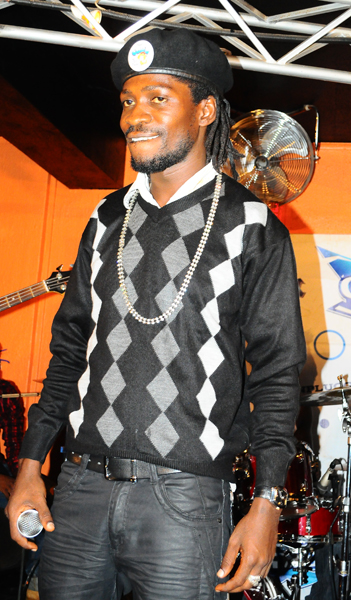 Once upon a time, the lavish, successful artiste Bobi Wine was just another boy in Kamwokya slum. Bobi Wine, real name Robert Kyagulanyi, then used to sell water and make bricks to top up his school fees.

With such a humble background, Bobi Wine resolved to fight injustice and poverty.

"I was supposed to be a lawyer because I wanted to fight for rights of the poor. When I realised that there is more hypocrisy in the law than democracy, I then chose to become the people's mouthpiece through music".

His songs on poverty like Obululu Tebutwawula, Carolina, Ddipo, Kiwaani and recently Obuyonjo, attest to the struggle. Known by different titles like Omubanda wa Kabaka (the king's rogue), Ghetto President, Ladies' Wine, and Mr Katala, Bobi Wine has managed to separate the artiste from the person he is. His stage name and titles tell of a 'bad man' (Caribbean patois meaning a rogue), belying the friendly, shy and big-hearted person beneath the bravado. To my surprise, on arrival at his Fire Base studio, he greets everyone.

"My brother, it is me. People just have the wrong perception", he says coolly.

Unlike most who get intoxicated by fame, Bobi Wine has used it to help others, especially his family, like his brothers Mickey Wine and Eddy Yawe in their music and political careers, respectively. Bobi Wine does not want to be lonely at the top and has chosen to rise with his family. Married to Barbie Itungo, he explains that growing up together has enabled him to care for his kin. In addition to his charity, Bobi Wine has also donated a 15-decimal plot of land to Busabala Police to build a station near his One Love beach.

The singer is also a businessman and farmer, who loves animals and owns horses, rabbits, guinea fowls and dogs, among others. So, why does he perpetuate the 'bad man image'?

"I was a bad boy in school, but I was never undisciplined. I would never let anybody step on my toes be it a student or teacher", says Bobi Wine, a Makerere graduate of Music, Dance and Drama.

His manager, Lawrence Labeja, knows him to be "an excellent person", who wants the best for others.

"For the last seven years I have managed him, all I see in him is a developmental mind", says Labeja.

After 15 years in the music industry, Bobi Wine reckons he will slow down but may continue to release a hit every year. Born February 12, 1982 in Mpigi, Bobi Wine says he is a spiritual man, who finds time for God. Before he came of age, he used to entertain fellow students for Shs 50 each, with his walkman and a borrowed amplifier and speaker.

He now thrills our ears with tunes like Wendi, Maama W'abana, Bada and Kikomando.