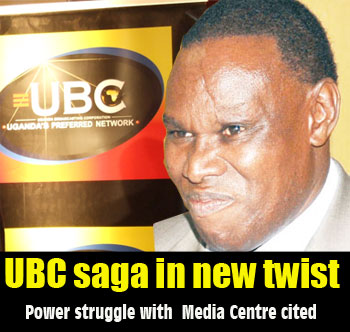 A power struggle between Uganda Broadcasting Corporation and the Uganda Media Centre on the one hand, and political interference from government on the other, are some of the causes of the problems that have blighted the public broadcaster since its inception in 2005.

The Observer has learnt from various sources familiar with UBC’s operations that because the Uganda Media Centre, which is under the Office of the President, wants to take control of the media industry in Uganda, it has gone out of its way to fault UBC’s management at every stage “in the hope to cause a change of management”.

Lately, President Museveni has opted to address the nation on private or commercial stations such as WBS TV or Bukedde TV, and not UBC, the public broadcaster, which has the mandate to promote government programmes.

That, the source said, has been the handiwork of the people at the Media Centre in their bid to undermine UBC. The Observer was unable to get a comment from Fred Opolot, the Director of the Uganda Media Centre, as he was out of the country.

It is such reports that also led to the suspension of the Chris Katuramu-led UBC board two weeks ago over fraud, corruption and mismanagement. Others suspended included Edward Musinguzi Mugasa, the managing director; board members: Prof Pilkington Ssengendo, David Oola, Dr Daisy Namono, Fred Bamwesigye, Wandera, Tom Okurut, and Kabakumba Matsiko, the former minister of Information.

The matter has since been taken over by the police. An official at the Media Centre, who declined to be named, said they would not call it fighting or badmouthing UBC but, rather, the government agency is merely doing its work.

“It is part of the work and it is routine work. We have a mandate to monitor the media in the country. Yes, we have access to the President but we don’t badmouth UBC,” the official said.

At the transformation of UTV into UBC TV, it was never envisaged that the public broadcaster would command such large amounts of money and, therefore, little preparation was made.

UBC is a state company created by a 2004 Act of Parliament, which merged Uganda Television (UTV) and Radio Uganda operations. The corporation became fully functional on November 16, 2005. It has since expanded to two television channels and five radio stations.

At the time of its formation, Uganda was preparing to host the Commonwealth Heads of Government Meeting (CHOGM) and needed UBC up and running to broadcast the event.

A lot of money was pumped in to buy state-of-the-art equipment, including an Out Broadcasting (OB) van, but management instead bought a second-hand OB van at an inflated price of Shs1.2 billion.

In fact, at that time, several staff were laid off as the new management sought to give the corporation a new lease of life. To many, this transformation was an opportunity to dip their fingers into the till. That explains why there is still controversy over the relocation from Nakasero to Shimoni Road.

Initially, it was agreed up to cabinet level that the relocation process would cost $5 million and a contract was signed to this effect between UBC and WellState Service. But a PPDA (Public Procurement and Disposal of Public Assets Authority) audit later, in 2007, found that the fee had risen to $6.9 million without explanation or authorisation.

And while the government was losing money inside the boardroom, more stealing was going on outside. As the building formerly housing UTV headquarters was going down, officials, including a presidential advisor, made off with windows, tiles, doors, sinks and even septic tank covers.

“That presidential advisor had the audacity to bring a personal generator to power the drill to remove windows,” a source revealed.

Another money minting opportunity showed itself in 2006 when Media Airtime sold the idea of marketing UBC shortly before the World Cup in Germany. The deal, according to an official who was involved in it, said Media Airtime was supposed to get 23% of the revenue generated before taxes. In other words, UBC was outsourcing its marketing.

“We sold them the idea to outsource [the marketing function] to increase revenue – that ‘we give you money and we get commission’,” an official said.

Although the company managed to secure rights to air the games, it faced opposition from some people in UBC.

“Many of them felt that our coming on board was closing the taps through which they were getting kickbacks. We faced a lot of difficulties because the guys eating felt they were being phased out. Three months into the deal, our contract was terminated with no particular reason,” the source said.

The matter is now in the Commercial Court after Media Airtime, which was bringing in between Shs 300 million and Shs 400 million in marketing revenue a month, sued UBC. Depending on how the case goes, there is potential for the public to lose more money.

The law also does not make matters any better. UBC is supposed to report to the minister of Information, who in turn reports to the President. It means, therefore, that UBC is always at the mercy of the Information minister, who can do as she or he pleases.

Around the world, however, all public broadcasters such as BBC and SABC must report to Parliament annually, and that is how UBC should operate. This would insulate the broadcaster from political interference.

As reported in The Observer’s How UBC Unravelled (June 2-5, 2011), the government has been known to influence which programmes, particularly political ones, should be aired; who should host them and what nature of hosts should be invited.

Staff who do not toe those lines have been dismissed, while events that involve opposition politicians are either not aired or hidden away deep inside other broadcasts.

One of the targets the suspended board set itself was the completion of the Bugolobi Villas project, where 89 mansions and a clubhouse were supposed to be built on 18 acres of UBC land on Farady Road. The project that was flagged off in 2008 stalled last year.

It had been hoped that the corporation would earn a net profit of at least $13 million (approximately Shs 31 billion) from the sale of the houses. In their handover report, the board says the project stalled due to delays in securing some critical clearance.

The project was supposed to be a joint venture between UBC and a Kenyan company, which later changed its mind about the project and instead proposed businessman Hassan Basajjabalaba to take up its interests.

With the plan falling through, UBC, at least according to the PPDA Act, was supposed to have re-advertised for competitive bidding, but instead sold the land to Basajjabalaba without following PPDA procedures.

Another UBC piece of land, on Kibira Road, Industrial Area, was leased out to another company, Extreme Innovations Ltd (EI), which according, to a source, was deliberately formed for this deal. In 2009, EI, whose directors include Information minister Mary Karooro Okurut and former MP, Margaret Muhanga, obtained a 49-year lease valued at Shs 954 million payable at the signing of the lease.

It turned out, however, that the company, formed to manufacture gum boots, did not have the said money and instead opted to sell its interest to a Chinese company. Police are now investigating whether, indeed, there was competitive bidding as required by the PPDA Act.

Daily Monitor recently reported that documents show the land was given on the directive of former information minister, Kirunda Kivejinja.

The Observer has also learnt that more people benefited from other chunks of UBC land during the late Basoga Nsadhu’s reign as information minister.

But UBC had always claimed that it did not have titles to the land, which then begs the question; how was it able to lease it out?

According to a source, the former secretary to the Uganda Land Commission, Elizabeth Laker in 2006 started creating titles and giving them away to private developers. At the time, Francis Gimara, the acting Corporation Secretary, was able to put caveats on the remaining 18 acres; one of the reasons his contract wasn’t renewed.

As earlier mentioned, interference from successive ministers of information have been at the centre of UBC’s problems. The ministers, according to a former employee of the corporation, manage it like their private business. A change in law to insulate is from such selfish ends is required, the source said.