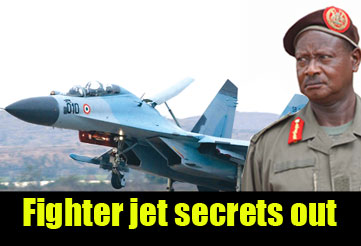 The revelation that the government is in the process of procuring six Su-30 MK2 fighter jets at $740 million has stirred a lot of controversy.

The government says the major reason for the purchase is to guard against external military threats, but the opposition maintains that this is another case of wasteful expenditure. Edris Kiggundu and David Tash Lumu explore both arguments and dig deeper to reveal the characteristics of the fighter jets, their capacity, as well as interesting information about the Russian company that will supply them.

When a Russian newspaper revealed in April last year that the Ugandan government had placed an order with Rosoboronexport, a state-owned arms exporter, for six fighter jets of the Su-30 MK2 type, officials in Kampala were caught flatfooted.

The deal, according to Vedomosti, would require government to pay for the jets much later when the oil money starts flowing. At that point there was no mention of figures. The minister of Defence, Crispus Kiyonga, vehemently denied that such an understanding had been reached.

His colleague, Hilary Onek, the minister of Energy and Mineral Development, said: “That’s new to me. We have never had any such negotiations. As far as I know, we have not negotiated with any of the companies as reported.”

But army spokesperson, Lt Col Felix Kulayigye, confirmed that there had been discussions with the Russians about the war planes, but the cost was considered too high.

“We never entered into an agreement with them,” Kulayigye said, adding that the country needed the fighter planes because of external threats, such as the disagreement over the use of the Nile waters.

That was the last we had heard of the deal until President Museveni revealed last month that Shs 1.7 trillion – roughly 4% of Uganda’s GDP, which stands at Shs 40 trillion – had been withdrawn from Bank of Uganda to purchase fighter jets from Russia. In a meeting with NRM MPs last week, Museveni did not go into specific details about the transaction, but revealed that he had gone to Russia and inspected the jets.

He said Uganda faced external military threats – which he did not elaborate – and thus needs to arm herself to be better prepared. Predictably, this blanket of secrecy over the deal, coupled with memories of the 1998 purchase of junk helicopters from Belarus, has already created suspicion that something could be amiss.

First, why did government first withdraw the money and then seek Parliament’s approval retrospectively?

Was there any fear that the NRM-dominated Parliament would not approve it if the proposal had been brought earlier?

Museveni told the MPs during the meeting that he did not want the opposition to use the information to campaign against the NRM during the presidential election campaigns. But analysts wonder why, then, the same President pushed Parliament to pass the cultural leaders bill in February, even at the risk of losing some votes, particularly in Buganda, where it is seen as an affront on the powers and privileges of the Kabaka.

In an interview, the former army commander, Maj Gen Mugisha Muntu, told The Observer that the Shs 1.7 trillion could be a cover-up for something else.

“I do not think that six fighter jets can cost that much. It could be used as a cover-up for something we do not know,” Muntu said.

According to Wikipedia,  an online encyclopedia,  a standard SU-30 MK2 jetfighter costs $35 million, meaning that the $740 million Uganda is willing to spend on six jets would be enough to purchase at least 20 jets.

It is possible that part of the money could be used to purchase other military hardware, yet one cannot rule out the possibility that the prices could have been inflated.

But Muntu, FDC’s secretary for mobilisation, noted that because of the high level of mistrust in government by Ugandans, many will view the fighter jets purchase as dubious, no matter what government says.

“If the politics of the country was managed in a responsible way, even the opposition would have been brought on board,” Muntu said.

Betty Amongi, the Woman MP for Apac, said the purchase confirms the view that the NRM is a dictatorship.

“The President doesn’t want other arms of government to check or operate freely. Even the NRM MPs are worshiping Museveni. They have surrendered all their powers and rights, plus roles, to the executive. This is a worrying time for the country. It is very unfortunate,” she said.

Two countries, Egypt and Sudan, declined to sign the agreement – which seeks to equitably regulate the usage of the waters of River Nile among the riparian countries – because they wanted to maintain the status quo stipulated in two colonial agreements they signed with the British colonialists in 1929 and 1959.

These agreements stipulate that other riparian countries should first seek permission from them before embarking on any large-scale development projects that would affect the level and flow of the waters.

Besides the River Nile dispute, Uganda has in the past had frosty relationships with Sudan, Rwanda, DR Congo, as well as the on and off threat of the Lord’s Resistance Army, a rebel outfit that now operates outside the country’s borders.

“Assuming there were threats, all our neighbours have basic fighting equipment. Why should we arm ourselves to the teeth?” Besigye said.

While suspicious of the sum involved, Dr Philip Kashaija, an international relations expert based at Makerere University, told The Observer on Saturday that fears of external aggression could be real.

“As a country, it is important to prepare ourselves for any eventuality; so, you cannot dispel any rumours of war,” Kashaija said.

According to Wikipedia, the Sukhoi Su-30 (Su-30MK) is a two-seat military aircraft developed by Russia’s Sukhoi Aviation Corporation. It is capable of accomplishing a wide variety of combat missions at significant distances of more than 3,000km, in any weather conditions and during radar jamming, both by day and night.

Additionally, the Su-30MK can perform early warning tasks, as well as exercise command-and-control over a group of aerial combat assets performing joint missions.

Rosoboronexport, the Russian firm that is going to supply the jets, is the sole state intermediary agency for Russia‘s exports/imports of defence-related products, technologies and services.

The corporation was set up by a decree of the President of the Russian Federation and is charged with implementation of the policy of the state in the area of military-technical cooperation between Russia and foreign countries.

Its credibility came into question in 2008 when Algeria cancelled the delivery of 34 MiG-29 Fulcrum multi-role fighters from the firm because of flaws in design, according to a report on www.defence.pk, a Pakistani website that analyses military affairs. The Russian military bought the rejects for its own use.

Again, in the same year, www.wired.com, a US website that reports widely about military procurement issues, reported that the firm had violated an international arms embargo against Sudan by selling the conflict-ridden country MiG-29 fighter jets, attracting the backlash of the USA which temporarily blacklisted it.

Interfax, a leading provider of critical information on Russia, China and emerging markets of Eurasia, reported last month that Rosoboronexport sold over $8.6 billion worth of weapons abroad in 2010.

“We exceeded the level of $8.6 billion in 2010, when our enterprise marked ten years from its establishment,” Anatoly Isaikin, the general director of the company, was quoted as having said.

The same report notes that Rosoboronexport has been increasing its sales by $500 million-$700 million annually in the past ten years. In particular, its sales grew from $2.1 billion in 2001 to $7.4 billion in 2009.

What Shs 1.7 trillion can do

At basic level, if government was to simply distribute the Shs 1.7 trillion among the 33 million Ugandans, each person would get Shs 50,000 ($20).
But, in serious terms, this money would be more than enough to construct 1,700 fully equipped Health Centre IVs at a cost of Shs 1billion each.

A Health Centre IV is supposed to be a mini hospital, with a minimum of 18 staff, including a senior medical officer, another doctor and a senior clinical officer. It should have a theatre capable of handling emergency operations, a general outpatient clinic, a functioning laboratory, a maternity ward, and separate wards for men, women, and children; and it should be able to admit patients.

The same amount of money can run Makerere University for at least 20 years, assuming the institution is run on Shs 85 billion a year.