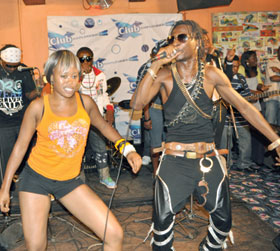 There are no boundaries to where a lucky man can reach; throw him in the Dead Sea and he will come out with a fish in his hand.

There is no musician who has lived to this description than Coco Finger. Getting nominated for the Pearl of Africa Music Awards is a dream to almost every Ugandan musician and to many, it takes them years to realise.

But it took Coco Finger just one year, getting nominated for Best Ragga artiste and Best New artiste although he lost both to Rabadaba and Eddy Kenzo respectively. But the message was clear: Coco Finger was going to be a force to reckon with.

Critics argued that he was riding on two hits Mikono Waggulu and My Miss and soon would fade away like other one-hit wonders. I thought they were right until last Thursday when Coco Finger was unplugged at Silk Lounge.

Patrons didn’t know what to expect from Coco Finger, this being his first ever show since he kicked off his music career in 2008. Would he be too nervous with stage fright or burn out because his Mikono Waggulu album has only six tracks?

Nonetheless, Silk Lounge and Silk Ocean were filled to capacity. Because Coco Finger has those energetic performances, the stage was a thin layer of wood on the floor and two bands shared the floor - Gagamel and UB5 band.

Felix Dolibondo from the Krackers kicked off the show with his usual jokes about animals’ sexual behaviour. Although they were recycled, they got the crowd roaring.

Songwriter Oscar Muwonge had a chance to prove to the crowd that he can sing, doing his favourite Muzingo, a song dedicated to the Goodlyfe boys for not paying him after he penned Nyambura for them.

Samalie Matovu might have rocked 2010 with Omukwano Guyuma, but clearly its steamy days are long over, going by how unmoved the crowd was when she performed the song.

The shocker ,though, was having Bebe Cool curtain-raise for Coco Finger. No one saw that coming but Bebe noted that music is all about talent and respect and Coco Finger has both, that is why he couldn’t turn him down. The unusual humility was touching.

I must say winning the artiste of the year award changed Bebe. He no longer plays off a CD now and moves with his band everywhere he performs. Bebe Cool did a few tracks but the crowd was more interested in knowing why he broke up with the Kiwoko boys Eighton and Rainman.

“They came to me, I made them known to you and I had to let them go because I am there to [promote] upcoming musicians,” he said.

Then the moment we had been waiting came. Coco Finger jumped on stage, dressed like those Red Indian cowboys. The crowd didn’t just sing along to every song, they danced, clapped and asked for more.

Even though he has just six tracks to his name, it was the quality and not quantity that mattered.

This year promises to be even better; already his new hit, Party animal has tremendous reception. This guy is just not about to stop.