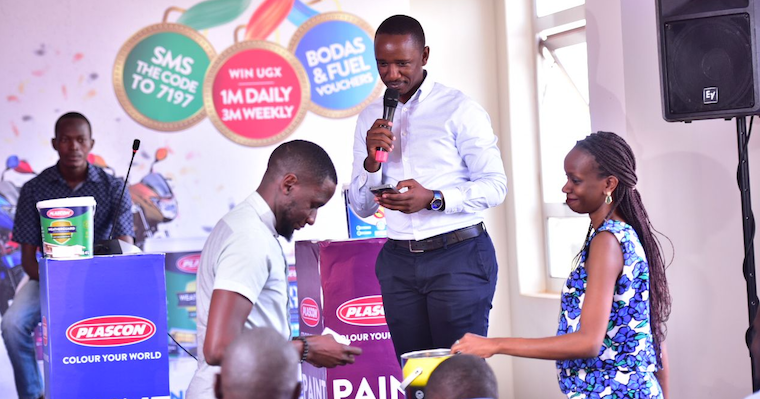 The launch at Kitende

Kansai Plascon has announced the launch of the 11th edition of their annual Paint and Win Promotion where customers will be rewarded for their loyalty and continuous use of Plascon brand products.

Dubbed ‘The Colour Cup’ edition, this year’s promotion was launched on Tuesday at St Mary’s Stadium in Kitende. It is scheduled to run for ten weeks from October 1 until December 13.

“Just like the World Cup, Paint and Win represents the biggest local event in the paint fraternity. We use the campaign to strengthen relations with our customers and our number one partners, the painters through various touch points including country-wide trade activations and online engagements. This year, we have decided to give them the ‘World Cup of Paint’,” Kansai Plascon managing director Santosh Gumte said.

He said the company has invested over Shs 2 billion in this year's edition. According to Gumte, customers will earn Shs 1 million cash daily, Shs 3 million cash weekly as well as other prizes including boda boda’s and fuel vouchers among others.

Last year, as part of the Paint and Win promotion, Plascon donated sanitation and PPE supplies worth Shs 50 million to the Entebbe Grade One hospital, the first hospital to handle cases of Covid-19 in the country.

Gumte said that this year's edition will not be any different as they will take on more CSR projects on top of what they have been doing over the course of the year.

“We shall continue to reach out to different communities through our CSR efforts and now that the Paint and Win promotion is here, the efforts will even be doubled. We shall reach all regions of Uganda through activations and we’ll have more prizes to give away as we move through the country," he said.

Winners will be announced during the weekly TV shows that will air every Sunday at 6:55 pm on Bukedde TV, NBS TV and Sanyuka TV.