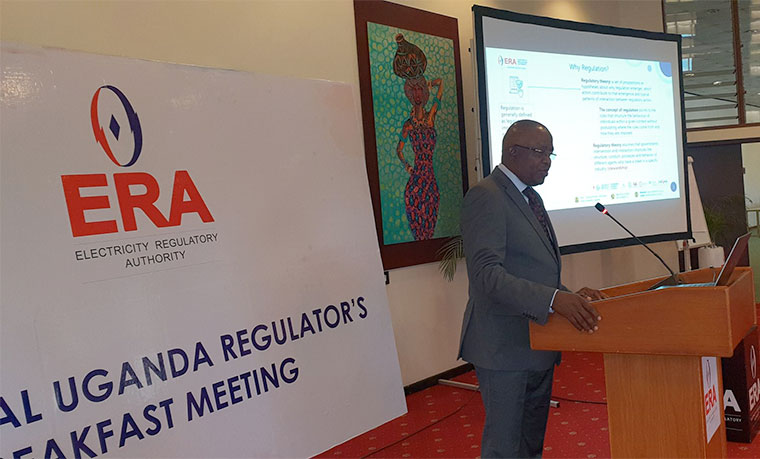 Creating a synergy of minds and competencies is needed if regulatory authorities are to play an important role in easing the doing of business in Uganda, officials from different regulatory bodies said recently.

It is against this background that Ugandan regulatory agencies have decided to create a platform to help them collaborate in order to meet their targets.

Ziria Tibalwa Waako, the chief executive officer at the Electricity Regulatory Authority, said the agencies should align their different mandates to see to it that they help more Ugandans live a better life.

“While we carry different mandates in our respective sectors, pursue unique visions, and have tailored missions, we share a common goal of ensuring improved welfare of our society,” Waako said.

She was speaking at the inaugural regulators breakfast, hosted by the Electricity Regulatory Authority at Serena hotel recently. Waako added that the times in which they currently operate as regulators demand regulators to exercise purposeful and responsible stewardship to effectively and efficiently use the scarce resources within which they operate in a synergized manner to complement each other to achieve shared goals.

“This partnership will not only save public resources but also improve the efficiency in the implementation of government projects and programs, improve service delivery and ultimately contribute to socio-economic transformation.”

“If you are not enabling socio-economic transformation, you are not regulating or rather you are carrying out a different type of regulation, which is not facilitating it. So, you are more of a roadblock.”

“The fact is that you are stewards, but what type of stewards are you? The assumption is that government’s intervention and interaction improves the structure, conduct, processes and behaviour. Your intervention creates what we call price discovery; it creates right-sizing; it creates competition.”

Sejjaaka also cautioned regulators to make sure they have more information on the sectors they regulate. Andrew Bakiza, the chairman of Ease of Doing Business, an umbrella body that brings together six regulators, said there is a need to deregulate in instances where there is double regulation or where the role of one regulator overlaps the other, which is stifling the speed of doing business. Bakiza said some laws are being amended to deregulate where there is too much regulation

“We have already agreed under that initiative to capture data once. If data is captured by one of those agencies, those agencies should internally share information so that they do not ask for it from the client again.

“URA has already pledged to remove the registration of TINs because that information is already provided. If you are a business, you get it from URSB. If you are an individual, you pick it from NIRA.”

At the event, a steering committee was constituted from the different regulatory agencies to iron out the details of how the proposed collaboration would work.

With the developments from the inaugural event, ERA hopes that through the platform, national regulatory authorities will periodically share ideas relating to their respective mandates that will culminate into an umbrella body that can shape the landscape of regulatory practices in Uganda.