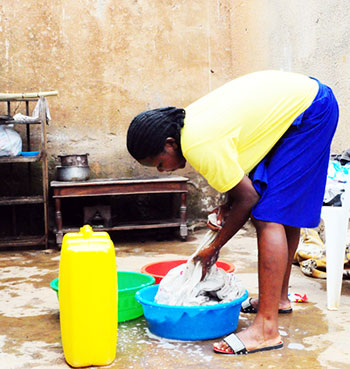 It is that time of year when households start making frantic phone calls to the village.

Ruth travelled for her annual leave and to celebrate Christmas with her relatives. She promised to be back a day after New Year’s day.

Since then, her phone has been off. The madam of the house is worried who to leave Junior with. Offices reopened on January 3. The festive season is long over. Ruth, the domestic worker, who has been so good at keeping the home organised, isn’t picking her phone.

Madam’s cousin, Jennifer, is already back at university for her accelerated bachelor’s degree program. Madam’s mother has promised to get Madam another young girl who dropped out of school to help.

Many Uganda offices aren’t meant for parents with toddlers. The neighbourhood day-care centre closed due to the prolonged shutdown of schools. Where does Madam leave Junior?

It is a crisis at Madam’s house. What can she do? She had resolved this year to work so hard so she could be promoted to the managerial position she covets.

“Ruth is very ungrateful, she should have told me she isn’t coming back,” Madam curses while jeering at the same time.

Good domestic workers (the International Labour Organisation (ILO) says this is the preferred term instead of maid) in Uganda can be hard to get, just like most workers anyway. They resign without saying so. Some “spirit” is always calling them to return home. In other cases, it is expectation management that is lacking.

A girl who has never lived in a house with electricity is all of a sudden expected to be a pro at using a juice blender! It is a sector that is due for disruption.

Almost all Kampala households complain about domestic workers. I think domestic work in Uganda is very difficult though.

The worker in most cases has to live at her place of work. Imagine if you lived at your office with your boss every single day for a year, working long hours and paid poorly on top of looking after unruly poorly raised kids who are regarded as princes by their peasant working parents. No weekend off and such other work hazards!

Yet in most offices, there are workers who do similar work to what domestic workers do - clean, cook, and take care of the people in there. The main difference is that most of these workers don’t live at the office and have days off when the office is closed.

They are also treated a bit fairly and have terms of reference to fall. In big companies, this work is usually outsourced to HR agencies and/or cleaning companies. They hire and equip these workers on behalf of their clients. Couldn’t this model work for domestic workers?

Companies could start placing domestic workers in homes in the same way they place cleaners or guards in other premises. What one could do is rent a home in a certain neighbourhood to provide lodging for workers in that area. Guarding companies do this.

Each morning, a domestic worker would simply walk to their place of work or be dropped there the same way guards are dropped for those who have to be at work early in the morning and picked in the evening.  Again, same way guarding companies do.

The company would train these workers on basics such as cleaning, using washing machines, toasting bread and such other mundane stuff domestic workers do.

A uniform could be provided as well and then have them placed in people’s residences where they would work for a couple of workers. Some homes may have a day worker and one for the night shift. Again, same model as guarding companies.

When a worker is tired of working for a certain household, they could request to be allocated another home and vice versa. The rights of domestic workers would be much more protected and domestic work would be brought into the formal economy.

Of course this would come at a higher cost to households which are currently paying peanuts to domestic workers.

Though of course the rate at which Ugandans are leaving the country to work as domestic workers in Middle Eastern states, a shortage of domestic workers to work in Ugandan households is nigh. It is a sector that is due for disruption.

Like it has done with recruiting agencies that send domestic workers abroad, the ministry of Gender, Labour and Social Development can license companies interested in providing this service and set up regulations for domestic workers working within Uganda.

I have had to top up the salary of my security guard because what his company pays him is really peamuts.

So, just as is the case with guarding companies; the companies will reap big but the domestic worker will get peanuts.

At most the company will pay a domestic worker Shs.150,000 a month, which s/he uses for food, transport, medical bill etc. At the end, the situation for the domestic worker working for a company is worse than the one employed directly by "madam".
Report to administrator