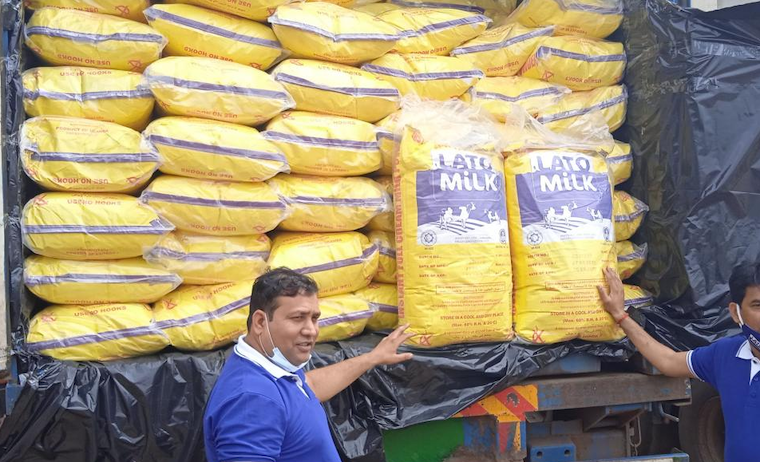 Some of the Lato milk for export to Zambia

Uganda has secured a new international market for its milk in Zambia following a long unresolved impasse with Kenya which was the largest market for the country's milk exports.

Since December 2019 when Kenyan authorities seized at least 3,000 bags of powdered milk and packets of Lato Milk on claims that Uganda had smuggled the products into the country without paying taxes, the impasse has since seen the milk trade between the countries souring.

The closure of the market saw the prices of milk at the farm gate go so low from Shs 750 per litre to Shs 250 per litre. Frank Tumwebaze, the minister of Agriculture, Animal Industry and Fisheries while unveiling the new market to Pearl Dairies Ltd, one of the largest milk processors in Mbarara, challenged other countries to first test the quality of Ugandan milk before closing off their markets.

Tumwebaze said that the unnecessary trade wars without evidence are a development hindrance in the region. He said that Uganda follows international standards and its products are certified by ISO.

Tumwebaze cautioned farmers on the quality of milk if both the market and the milk prices are to be maintained. Gen David Kasura Kyomukama, the permanent secretary of ministry of Agriculture said government is focusing on production and productivity as an issue of post-harvest handling and value addition and marketing because all these are linked together.

He said that the world is very keen on food safety and quality standards, and without the two, international markets will not be available. Samson Akankiiza Mpira, the acting executive director of Dairy Development Authority says the authority is faced with the challenge of farms without the cold chain infrastructure to check the quality of milk and other suppliers who evacuate the milk in the evening without checking the quality.

Yosia Bagabo, a cattle farmer and chairperson Kabura Cooperative Dairy agreed that the quality of some of the milk is not yet good but blamed it on farmers who sell outside dairies and other cooperatives.

We would then try to avoid putting our comments forward. Thanks.
Report to administrator