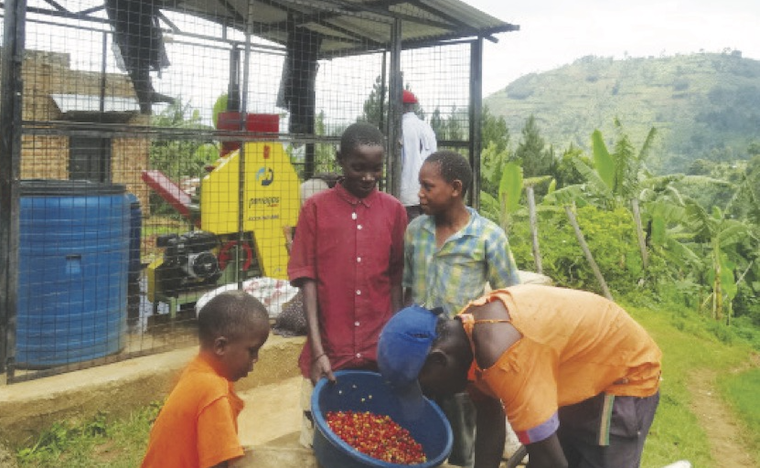 When Uganda imposed a lockdown last year to contain the ravaging coronavirus pandemic, the government ordered the closure of all institutions of education, businesses, including land and sea borders.

Since then, the consequences on economic activities have been dire. With schools closed and many jobs lost notably in the service sector, many people, including children, turned to agriculture to manage and survive the crisis. While this helped Uganda post its highest ever coffee exports in history, increased child labour also went on unchecked.

In this hilly coffee growing district of Mbale, in eastern Uganda, famed for producing the highly sought-after-Arabica coffee beans, small children, some as young as 10 years, carrying loads of coffee on their heads crisscross village paths along highlands to deliver freshly harvested coffee beans to processing plants.

“We have to wake up very early in the morning before sunset,” said 13-year-old Calvin Khaluha with a giddy smile.

“When the sun is hot, it’s harder to move across the hills, but this is the only way I can earn something to support my mother at home.”

With these vast coffee plantations increasingly attracting hundreds of child workers, it’s a pointer at how child labour is increasingly depriving children like Khaluha of their childhood.

But what’s happening in the country’s coffee industry shows a different story; the involvement of children in coffee chains, stretching from Ugandan farmlands to processing plants for a commodity that ends up in fancy coffee shops in markets from Europe to North America.

According to Aggrey Kibenge, the permanent secretary of the ministry of Gender, Labour and Social Development, new restrictions announced in June, which include the closure of all educational institutions across the country means, that cases of child labour will even spike, as Uganda, which grows more coffee beans than any other nation in Africa, battles to control the second wave of the epidemic.

“Parents and community leaders have a responsibility to end child labour and ensure that children are not exploited,” he said.

“The consequences of child labour are grim. Child labour exposes youngsters to bodily and mental harm. As government, we are trying to strengthen our enforcement agencies to end this vice.”

On a plateau close to Mount Elgon in eastern Uganda, farmer Patrick Mudowa looks over his five-acre coffee farm where he acknowledges employing children. Most of the children that work for Mudowa are those who have been out of school since last year when Uganda closed institutions to deal with spiraling infections. As schools gradually reopened earlier this year, most children preferred to stay working at the coffee farm.

“It’s not easy to get adult workers and many children are now out of school and available,” he says, “With children I pay them around Shs 5000 ($1.3) every day, which is not very expensive for me.”

According to the Uganda Bureau of Statistics, around 14 per cent of Uganda’s children are engaged in child labour. Since the lockdown, there has been around a 30 per cent spike in child labor, mainly in the country’s coffee and tea value chains, industry officials say.

The rise in the number of workers on farms has helped Uganda increase coffee output, which jumped around 60 per cent to hit 8.1 million 60-kilogram bags in the 2020-21 fiscal year compared to a year earlier, according to the Uganda Coffee Development Authority.

But the increasing child labour on Uganda coffee farmers threatens to taint Uganda’s key export commodity, upon which the country relies for around a quarter of its foreign revenue earnings.

The World Bank has warned that a scale-up in agricultural activities has put additional strain on natural resources, notably land, which was already under pressure from rapid population growth and urbanization.

By February, only about 50 per cent of the children had returned to school, according to the World Bank. Children like Kevin Nabwi turned to working at a village coffee processing plant after both of his parents lost their jobs at a food market in the nearby city of Mbale when the country went into the first lockdown.

The anticipated production shortfall in Brazil has helped drive up local farm gate coffee prices in Uganda by around 30 per cent this season, attracting more traders in the industry.

“I get paid Shs 3,000 for every coffee bag I process,” the 15-year-old who until last year attended high school says, flipping through ripe red coffee berries on a wheelbarrow.

“With what I earn, I can help my parents buy food and other necessities. I have never earned money before. I am happy.”

This year, International Labour Organisation, under the Accelerating Action for the Elimination of Child in Supply Chains in Africa (ACCEL AFRICA), has been training journalists and communication experts in six African countries, including Uganda, Ivory Coast, Mali and Nigeria about how the media industry can help raise awareness about how to tackle the scourge of child labour.

The ACCEL Africa project addresses the child in selected supply chains in Côte d’Ivoire, Egypt, Malawi, Mali, Nigeria and Uganda with a focus on some of the most widely traded agricultural commodities, including cocoa, coffee, cotton, tea and gold.

Fairtrade Africa, which brings together over a dozen coffee organizations in Uganda, has also published guidelines aimed at stemming child labour from the country’s coffee supply chain. These include requiring member organizations from employing children and ensuring that the children remain in school and only engage in light farm duties when they are out of school.

Other industry groups and international organizations have issued similar guidelines for farmer groups, processors and exporters, in what appears an echo of a campaign led by global chocolate manufactures to end hazardous child labour in cocoa plantations across West Africa.

But fighting child labour is particularly hard in Uganda, where schools have been closed for more than a year, said John Khulu, the chairman of a coffee farmers group in Mbale district. Some of the work children undertake include working night shifts at processing plants, using machetes to prune coffee trees and picking coffee berries during harvests.

“We are prohibited from employing children but with many of them idle in the villages, these children keep going around looking for work,” he said. “To some people, it makes business sense to hire children because they are usually cheaper during peak periods like harvesting, but our members are well aware of the consequences of employing children.”

In Uganda, some 1.7 million households are engaged in coffee farming. With a total of nearly 500 million concrete trees spread across central, northern, eastern and western regions, coffee farming is the mainstay of the country’s cash crop sector. Uganda accounts for seven per cent of global Robusta exports.

The industry is also increasingly becoming a magnet for child labour in a country that has gone into a second lockdown in less than one year, amid spiraling coronavirus infections.

Margaret Namudu walks some 10 kilometers every day, along narrow foot paths that traverse around this hilly countryside to reach her workplace - a coffee hauling plant in the nearby town of Bududu. Here, the 14-year-old Namudu joins other girls to sort coffee beans and clean the plant yard warehouse.

Every evening, she joins a group of around a dozen other teenagers to trek back home. How much she earns usually depends on how many bags of coffee she can sort at the plant.

“Sometimes I sort around three bags, especially if I am in good health,” she says. “Sometime I get a headache from the noise from the processing plant.

This affects my concentration. But I still think coming to work helps me meet my former classmates. This is much better than sitting at home.”

Ugandan officials say that government is doing its best to stem the vice of child labour, although this is increasingly becoming a big scourge to dismantle, mainly due to the prolonged closure of schools.

“The school closures and loss of incomes triggered by the Covid-19 pandemic have exacerbated the problem of child labour as many children have been forced to enter the workforce in order to help their families survive,” Kibenge said.

The author is a consultant with the International Labour Organisation under ACCEL Africa Project.