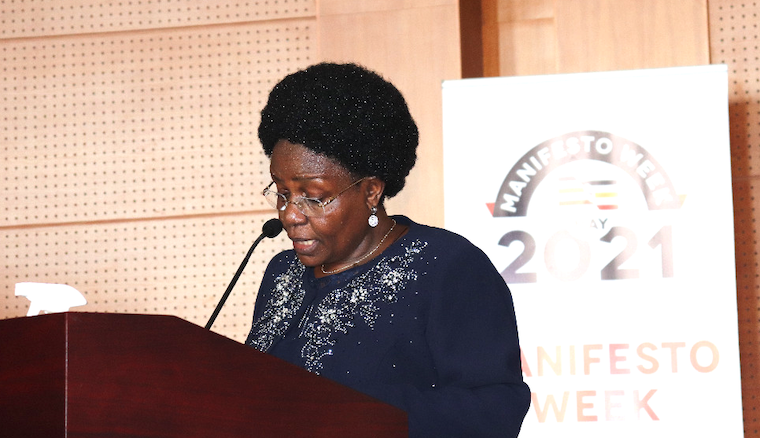 The government of Uganda has mooted a number of changes in the electricity subsector, and is set on implementing them. This was disclosed by Mary Goretti Kitutu as she presented the performance of the energy and mineral development sector in the implementation of the NRM Manifesto 2016-2021 on Thursday, May 6, 2021.

Kitutu was speaking as the then minister of Energy and Mineral Development. Among the outstanding announcements by the minister was that the government has instructed the three companies in the electricity subsector to merge their operations within three years, so as to achieve greater efficiency.

Kitutu said these three companies will become one company with one board, adding, “The Rural Electrification Agency is going to be a department under the ministry.”

She then broke her speech into seven sections.

The minister reported that the Government is monitoring and supervising petroleum exploration activities by Oranto Petroleum Limited (in the Ngassa Shallow and Deep Play contract areas) and Armour Energy Limited (in the Kanywataba Exploration Area).

Following the signature of various agreements for the East African Crude Oil Pipeline (EACOP), construction of infrastructure for production, processing and transportation of crude oil is now expected to commence at the end of 2021.

Regarding the refinery development, Government is participating in the Front End Engineering Designs (FEED) study for the refinery project, which is being undertaken in Milan, Italy.

The FEED is expected to be completed in July 2021. The RAP study for the Refined Products Pipeline from Hoima to Mpigi is at 95% complete; Cabinet approved the extension of the PFA from 24 months to 41 months to enable finalisation of FEED, ESIA and sourcing of financing; and Government in April 2018 entered into a Project Framework Agreement (PFA) with the Albertine Graben Refinery Consortium (AGRC) as the Lead Investor to develop a 60,000 BOPD in Kabaale, Hoima.

Kitutu said the transmission network expanded by 13% to cover 2,989km as at end of 2020. She attributed the increment to the commissioning of the following transmission lines:

To increasing access to electricity, some 2,550km medium-voltage networks, and 2,596km of low-voltage networks were added onto the grid. In addition, 252,460 connections were achieved under the Electricity Connections Policy since it was launched in 2018.

A total of 15,000 ready boards have also been completed for the first phase. Government has also commissioned electricity transmission substations with transformation capacity of 440MVA that include Queen’s way, Masaka, Mbarara North, Hoima, Iganga, Mukono, Namanve, Luzira, Kapeeka and Kawanda. Also, electrification of 570 out of 620 sub-counties to accelerate access is on progress.

Kitutu said over the last five years, the ministry has continued to promote the use of renewable energy technologies in the country with a view to broadening the power generation mix. This has been mainly through the following projects:

Biofuel Development and Promotion: The Biofuels Act, 2020 was published in the Uganda Gazette of August 2020 and draft Biofuels Industry Regulations have been developed. The objective of the regulations is to set out the requirement for licensing the biofuel producers, and the oil companies to enable blending of biofuels with petroleum products.

NAMA Biogas Project: The ministry is implementing NAMA biogas project with the aim of generating electricity from municipal solid and liquid waste in the cities of Mbale, Jinja, Masaka, Mbarara and Kampala Capital City Authority.

Solar fruit driers were constructed and installed in Kikyusa, Luweero district to facilitate fruit drying and crop value addition. In Kasese district, construction of a solar dryer at Nyakatonzi commenced. This dryer will be used to serve as a demo to the surrounding areas.

An MoU between Ministry of Energy and Mineral Development and the Russian State Atomic Energy Corporation Rosatom on peaceful uses of atomic energy was signed on 19th June 2017. The MoU focuses on development of nuclear power infrastructure, education and training, nuclear and radiation safety, non-power application of atomic energy, nuclear research centers and design and construction of nuclear power plants.

Another MoU was signed between Ministry of Energy and Mineral Development and China National Nuclear Corporation on nuclear energy development, on 11th May 2018 in Beijing, China. A nuclear power roadmap was prepared and a stakeholder’s consultative meeting held from February, 20 to 21, 2020.

Hence the Energy Efficiency and Conservation Bill and the corresponding Regulatory Impact Assessment (RIA) were prepared and will be resubmitted to Cabinet for approval after the lockdown. Power distribution loss was reduced from 18.6% in 2016 to 16.8% today. Government installed power factor correction equipment in 45 clusters of small and medium enterprises

Seven hundred thousand (700,000) Light Emitting Diode (LED) bulbs were distributed for free to electricity consumers. Sustainable energy campaigns were held such as the annual Energy Week and quarterly regional campaigns across the country. In addition, the Energy Efficiency Roadmap of Uganda was developed in 2017.

Kitutu said tremendous progress in mineral exploration, development and value addition has been made as indicated by: (a) The Mining and Minerals Bill, 2020 which will address key challenges and bottlenecks in the mineral sector was approved by cabinet on April 12, 2021 and it will be tabled in parliament for discussion; (b) An online mineral licensing platform which eliminates the delays of the paper-based licensing system has been developed.

Further, to regulate illegal exploitation of natural resources, Government has commenced on the drafting of Regulations that will enable implementation of the International Conference on Great Lakes Region (ICGLR) Mineral Certification Mechanism.

Government has promoted investment in its mineral resources and attracted private funding that ran successful exploration programmes. The projects are now at mine development stage.

The Government has contracted X-Calibur, a Spanish company, to carry out aerial surveys of Karamoja sub-region to establish the mineral potential of the area. These commenced in March 2021.

Government also set out to establish the geological and mineral potential of the country. So, 103 million [metric?] tonnes (MT) of iron ore in Kabale district and 15MT in Rubanda district have been established, bringing the total iron ore reserves in southwestern Uganda to 318 MT with estimated resource of up to one billion tonnes.

The iron ore in Kabale and Muko is associated with gold, nickel, zinc, tin, titanium and wolfram. A feasibility study for establishment of an integrated iron and steel plant in Uganda has been done.

Geothermal investigations were initiated. Eight temperature gradient holes were drilled at Kibiro in Hoima district. The data and information will be the basis for drilling deep exploration wells.

Surface studies at Panyimur, Buranga and Katwe have been completed and geothermal conceptual models developed for Panyimur and Buranga. The models will be used to locate drilling sites. Environmental and Social Impact Assessment (ESIA) is being undertaken at Panyimur and Kibiro before deep exploration drilling is undertaken.

Government put in place an inter-ministerial committee to identify a private investor for the development of the Kilembe Mines Project. The process of identifying the investor under a public-private partnership has commenced. Draft Expression of Interest and Request for Proposal have been prepared.

Kitutu said in order to contribute effectively to the national economic recovery, the sector has identified within its policy goals the key areas of focus as follows:

In the energy resources subsector, focus will be to develop power generation, transmission and distribution infrastructure to support value addition; reduce the cost of power perticularly for  manufacturers to five cents per unit from 8.7 cents; promote renewable energy and energy efficiency as a priority; and reduce the share of charcoal and firewood from 85% to 50%.

In the oil and gas subsector, emphasis will be on construction of production, transportation and processing infrustructure; while in the mineral development subsector, it will be completion of the airborne geophysical survey of the Karamoja sub-region, putting in place a modern mineral laboratory as well as mineral beneficiation centers in the country, and value addition to the mineral reserves being discovered.

0 #1 kabayekka 2021-06-05 16:29
All these are very good technical plans that are modern for a poor African country. The problem is the corruption that goes with it all.

Because if such national plans went ahead especially with the help of international aid organizations, and the cost came to 80 billion dollars, 30 percent of this money would go into African corruption.

Some of these project programs unfortunately would stall by the year 2040! The environmental repercussions would still persist on the continent of Africa.
Report to administrator
0 #2 Elly Odongo 2021-06-09 16:09
Thanks for article, though the picture incontext is not true reflection of standard operating procedures while working in HV lines in Uganda, a technician without helmet and using a ladder is safety hazard to the technician.
Report to administrator