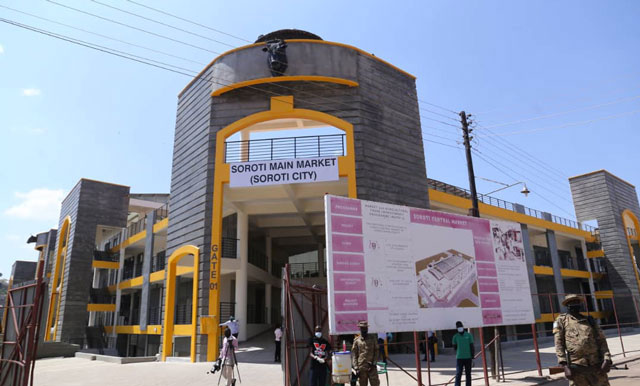 In Soroti, in an area full of shanty buildings with rusty iron sheets, stands a majestic building that could be mistaken for a modern shopping mall. The architecture is quite impressive for the town’s (or is it city?) standards.

As I wonder who could be putting up this shopping mall and whether Soroti can sustain such an investment, my eyes land on the signage. It is the market recently built by the government of Uganda. I am actually impressed. I have been to many major towns or cities where such markets have been built but the Soroti one stands out. Not in size really but in ‘modern’ aesthetics.

The government must actually be commanded for such markets. Vendors won’t have to suffer selling stuff in filthy conditions. Rain is no longer an issue as it previously was. Customers now have parking and such other amenities. I hope that those responsible for these markets will take great care of them.

These markets are mega in size and in some towns like Moroto, they really stand out as the biggest building in the area. This means that the government didn’t spare any coin in building them.

However, when you visit these markets especially in parts that aren’t dealing with fresh produce and vegetables, you realize that most of the stuff being sold is imported. If we can build markets this big, we can also build factories.

In all major regions of the country, there is a product that can be made. This depends on what the particular region is known for. This would add value to the products, give them a longer shelf life and create thousands of jobs in each region. Young people wouldn’t have to think that they have to migrate to Kampala to make it in life.

Businesspeople in upcountry towns won’t have to think like many of them do now that to become truly successful, they must own something like a hotel in Kampala. Since we import stuff as easy to make as tomato sauce, we can add value to these products and reduce imports while at the same time earning more from exports. The government simply needs to identify and focus on one major factory per a region or even town.

When you get to have major factories in a particular area, other businesses actually are set up to either feed that factory or to make complementary products that factory needs. Factories also need spare parts, service and maintenance; so, entrepreneurs in machining and milling will set up shop.

One major factory in a town will lead to unprecedented development in the area. Housing, education, entertainment and recreation, health care, financial services and even supermarkets would set up.

Instead of the mega markets that have been built selling imported stuff, they would be stocking locally made products. The farmers would have better returns on their harvests since there would be a factory taking their produce. Traders wouldn’t be so worried about selling their stuff before they go bad.

Young educated people wouldn’t be lining up in queues that stretch a mile at the ministry of Internal Affairs to get passports so that they can become maids and nannies in the Middle East.

They would remain and work here at home and gain invaluable skills. There aren’t many skills one gets in being a housemaid. Yet some of the factory workers and their managers as well as entrepreneurs would look at the factory’s value chain and invest in smaller factories, creating more jobs.

Logistics businesses such as transporters would also grow moving raw materials to the factory and then taking out the final products to the market. The markets in their current form are good and necessary but they should be complemented by government setting up major factories in the regions so that traders stock less of what is imported, give farmers more value and create a value chain that would significantly lead to development.

Even that beautiful soroti structure is silent but the salient struggles are so massive.

Go investigate and write a story.
Otherwise I agree with you largely in establishing factories as said.
Report to administrator