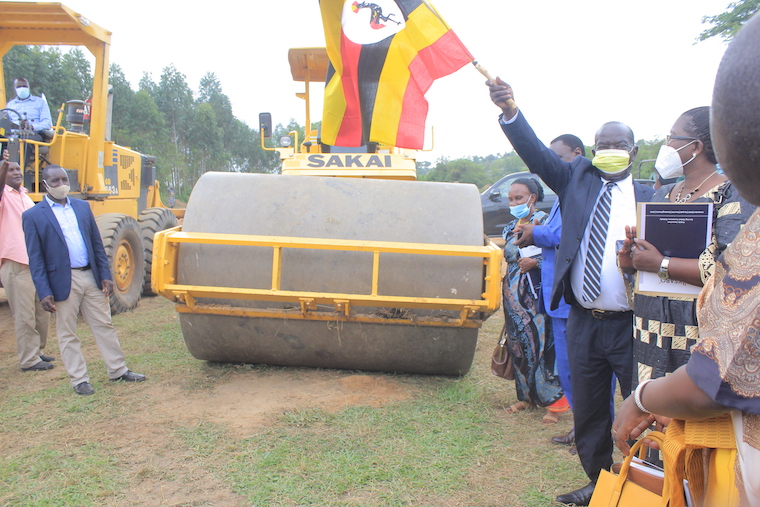 Dubbed the Nkonge solar power project near the Kabamba military barracks, its construction has been undertaken by Xsabo Group (a Germany-based company), which has invested over Shs 63 billion.

Considering that only 38 per cent of Ugandans living in rural areas have access to electricity - largely from the main grid, Xsabo Group’s investment, is intended to ensure that more Ugandans, especially those in the villages, can have access to power for a better livelihood.

During the making of his speech, Ssekandi said that the government was delighted to have partners like Xsabo, fostering socio-economic transformation in Uganda.

“With more electricity being generated through the support of Xsabo Group, a number of communities near this power plant will be able to do more business, because of the easier access to electricity,” Ssekandi said.

Notably, the Nkonge project, whose construction starts with immediate effect, is expected to be completed by December this year. And at that point, it will be producing 20 megawatts of power, which is going to be distributed through the main national grid.

Bernard Okello, the general manager of Xsabo Group (Uganda office) told The Observer that the whole process of erecting this project, is to supplement the power from the main grid. Okello added, that the Nkonge plant will be connected to the main grid substation in Mubende through a wiring network from the solar panels, that will be installed.

In light of that, Ssekandi said that such an investment cements Uganda’s position as a key force in Africa for clean and sustainable energy for economic growth, social equity, a stable climate and a healthy environment. In addition, Ssekandi urged Ugandans especially those near the project to embrace activities to increase household income, which he said will come through industrialization and commercial agriculture.

Ssekandi commended Xsabo for this new power plant project because it supports the aforementioned government programmes. That said, the Nkonge solar power project is going to be a state of the art kind, with world-class automatic sun-tracking modules. It will be the most modern solar power plant in Africa.

However, David Alobo, the chief executive/managing director of Xsabo Group (the Germany head office) noted in his speech, that his company’s main motive is to harness smart energy storage technologies, to proactively integrate promising industrial opportunities, to create more jobs for Ugandans.

With renewable energy being one of the major issues, to guard against climate change and environmental degradation, Xsabo Group’s investment in Uganda, will further protect the forests, many of which have been cut for firewood in homes.

That is a particular concern, especially in the villages but if the locals get an alternative source of energy for lighting and even cooking, there will be little need to cut trees eventually.

The Nkonge project ground-breaking ceremony was also attended by the Democratic Party head, Norbert Mao, who commended Xsabo Group for their unwavering will to improve people’s lives.

+1 #1 kabayekka 2021-04-04 16:23
One reckons the sun shines well all over the tropical lands for the poor and the rich. And one understands that nothing is for free in this world other than the solar energy.

Let a conclusion be reached that my roof panels can produce electricity all year round during day time. I only use solar energy for light and cooking during the night.

Let me hope that the large amount of solar energy the panels have generated all day long, I am able also to sell it to these famous national electricity grids.
Report to administrator
0 #2 Darlington Sakwa 2021-04-05 03:49
Adding power to the national grid, whether Solar or hydro is of no significance to the increase in the number of Ugandans that will access electricity.

We are already generating more than we are consuming because of the poor distribution network.

Instead of wasting money generating idle power, we should focus on extending the distribution of the excess power already generated to consumers.

This will result in increased consumption and lower tariffs for consumers
Report to administrator
0 #3 kabayekka 2021-04-07 00:39
What of the wind energy generation projects that can continue to help this country become energy sufficient.


This technology can allow the introduction of electric trains for improving cheap mass public transportation on the vast African continent!
Report to administrator