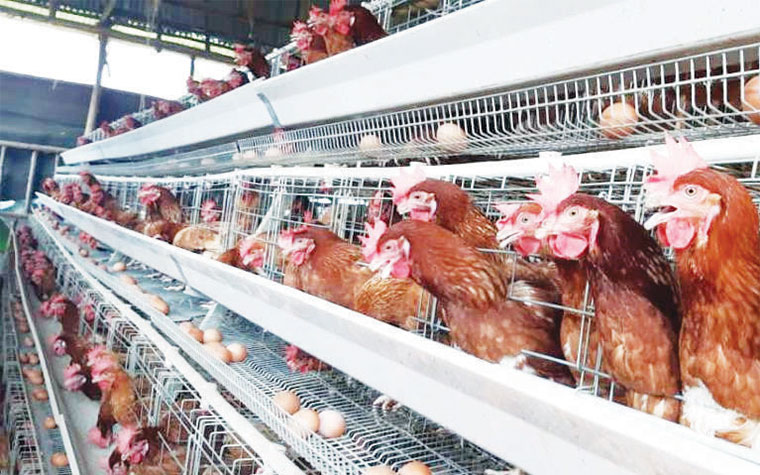 Chicken in a cage at Kasolwe

Last week’s media tour of the expansive Kasolwe stock farm in Kamuli was an eye-opening experience of modern farming methods that have been brought close to the rural farmers in an elaborate style right from inception to marketing produce. ERNEST JJINGO highlights the best farming practices.

The four-hour journey to Kasolwe stock farm was a gruelling one characterized by potholes on the road and sights of people in despair.

However, the mood at the farm was one of sheer excitement as several locals gathered in different groups to learn about the different forms of livestock farming. Expectedly, the biggest attention was reserved for cattle and pig rearing but a significant number concentrated on the goat and chicken tents.

Here, a team of farming experts equipped local farmers on the use of latest technology as well as providing free chicken to kick-start their journey from subsistence to commercial farming.

Dr Jackson Franco Mubiru, the director, Rural Poultry at the National Animal Genetic Resources Centre and Databank (NAGRC&DB), emphasized that whereas many farmers engage in poultry because it doesn’t require much capital to start, many fail be-cause they fail to follow best farming methods.

“We are here to teach them all the basics from looking after day-old chicken up to the time when they sell it. Failure to follow the right steps may lead to poor chicken.”

As many farmers in the training session observed, following every step in poultry is key and this approach could elevate communities from subsistence to commercial poultry farming.

Poultry farming has increased significantly in recent years in response to increasing consumer demand for eggs and meat. It is also one of the most delicate sectors in agriculture because it requires full-time attention on top of training.

In that regard, most success stories in poultry are of farmers who invest heavily, leaving many smallholder farmers to pick crumbs. However, a new trend is emerging in Busoga sub-region, with many farmers venturing into poultry on the inspiration of the Kasolwe stock farm located in Bulawoli sub-county, Kamuli district.

Kasolwe sits on more than 2,000 hectares and was set up in 1969 to be a model farm to provide farmers in the region with the best farming methods, right from providing the top breeds, trainings in farming as well as marketing produce. Over the years, however, the stock farm’s impact on farming diminished to the extent that the communities stopped seeking its support.

When speaker of parliament Rebecca Kadaga visited the farm in January last year, she was impressed with the facility even though she noted there was still a lot needed in order to transform communities in Busoga.

“Now I can see there is some life; some time back you could come here and it was just a bush,” she said.

“What is needed is to involve the communities and educating them about overcoming poverty instead of merely giving them good breeds.”

Over the past five months, the management of NAGRC&DB has engaged the communities through their leadership by training them in the best farming methods. Whereas Kasolwe has come to be renowned for cattle breeding, poultry is the silent success story.

When we visited the farm last week, there were dozens of farmers, some of whom had travelled from Buyende, to attend trainings in poultry farming. For one, Nicholas Kiberu had been a poultry farmer for 10 years but was yet to make any significant profits in the venture until he started attending trainings at Kasolwe.

“The first time I came here was in September, 2020 to buy Kroiler chicken for farming,” he says.

“I was shocked when the management insisted to train me first before giving me the chicken. I hesitated at first but I’m grateful that has helped improve my farming skills because I now have more than 1,000 chicken.”

“I paid close attention to the breeds that generated more money… I also learnt about common diseases and how to identify them, treat them and vaccination, among other things. I had never paid attention to this since my mind only focused on subsistence rather than commercial rearing of my birds,” she said.

“From Kasolwe, I was also able to get starter chicks thanks to the presence of a hatchery and a brooder,” Namugga echoed proudly.

These success stories are part of the road to transforming subsistence farmers into commercial farmers as a main objective of Operation Wealth Creation (OWC) in conjunction with NAGRC&DB. Serving as a centre of learning and excellence in livestock farming to boost knowledge sharing for increasing productivity in Busoga, many of the local farmers in the region have been able to boost their production quality and quantity.

Dr Peter Beine, the acting NAGRC&DB executive director, credits this leap to Kasolwe’s new approach of “teaching them how to fish instead of providing them with fish.”

At Kasolwe are fresh poultry structures with capacity to keep 5,000 chicken. A total of three parent stock poultry rearing units have been set up to house dual-purpose birds that are to be bred and effectively distributed to communities in the sub-region to enhance efforts towards poverty alleviation, improved health and improved livelihoods.

In addition, there is a 100,000-egg capacity hatchery and brooder. Dr Beine notes that the rural poultry program will lead to production of 1,040,000 chicks per year, benefitting 2,080 households with an estimated earning of Shs 10,000,000 per year, per household beneficiary.

To achieve this vision, Dr Mubiru has identified three stages of the value chain. Each has its own vision, which has been used to identify opportunities for stimulating systemic change within the poultry value chain.

Primarily, we are targeting to improve poultry production and to help farmers get market; we are equipping them to add value, increase efficiency and maintain quality to meet market requirements,” he says.

“With that in place, preferences will shift whereby farmers will not be looking for market, but the market will look for them.”

“Starting this year, we are implementing a special youth program for training, skilling and equipping youths with everything they need to succeed in being sustainable income earners from the poultry enterprise- this way, we will significantly contribute to managing the youth demographic challenge we are facing as a country-adds Dr Beine.

From the ongoing activities at Kasolwe, it is hard to disagree with Dr Beine that if managed well, Kasolwe could become the poultry basket of the country and the region at large.

0 #1 kabayekka 2021-03-02 17:46
From the ongoing activities at Kasolwe, it is hard to disagree with Dr Beine that if managed well, Kasolwe could become the poultry basket of the country and the region at large.

In addition to the Agricultural production world wide, Busoga has a natural sandy loam soil very good for fruit growing.

Especially the orange and lemon fruit. Which presently is very necessary to fight the current world wide flu plague.

Citrus fruit growing as in California, the farmers involved have never looked back. One can miss an egg for two days. It is indeed very difficult to miss an orange or lemon drink every seven hours.
Report to administrator
0 #2 kabayekka 2021-03-02 17:53
It is unfortunate that the Israel Agricultural experts who were anxious to introduce the Mediterranean climate fruits in the region of Busoga during the Obote I and Idi Amin era, have been returned in Uganda. N