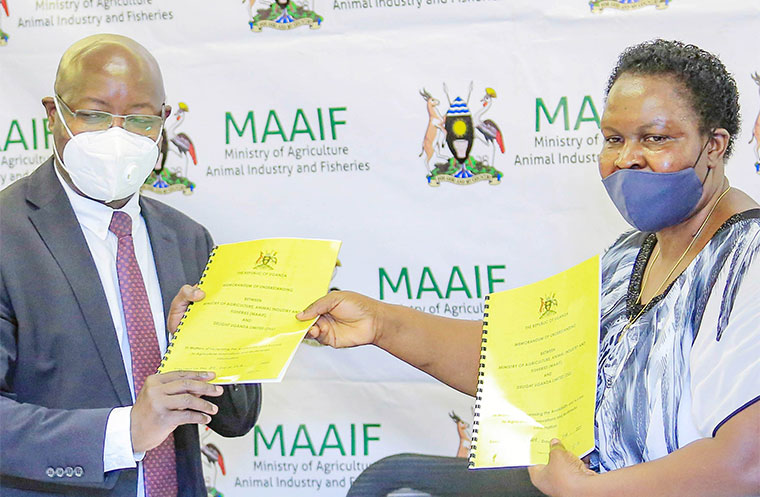 In 2016, entrepreneur JULIAN ADYERI OMALLA, the chief executive officer of Delight Uganda Ltd, contemplated quitting the expansion of her juice business when she lost more than Shs 3.8 billion after a failed venture in South Sudan due to instability.

Faced with uncertainty and growing debt, she embarked on large-scale fruit growing on her 1,800-acre piece of land in Nwoya.

The farm has transformed the livelihoods of the community and in a bid to raise the bar to commercial sustainability, government has rewarded her persistence with an offer to finance the construction of a Shs 30bn fruit factory that is expected to empower communities through employment and skills development, writes Ernest Jjingo.

Northern Uganda fruit farmers are set to realize more benefits following a partnership through which government has agreed to finance a juice-processing factory for Delight Uganda, a firm currently involved in commercial horticulture working together with the general community of Nwoya district as outgrowers.

Through a memorandum of understanding signed at Serena Kampala hotel last week, government announced a commitment of Shs 16bn to take care of the first phase of the facility establishment expected to eventually be completed at the total cost of Shs 30bn.

According to Vincent Ssempijja, the minister of Agriculture, government’s move to partner with Omalla is founded on the company’s background in enterprise development acumen in fruit-growing and juice-processing as well as the community development-focused model that handholds household farmers along the journey of shifting from subsistence to commercial farming.

“This partnership is part of government’s quest for uplifting community standards of living through supporting farmers into shifting from farming for solely family consumption to commercializing the activity for household sustainability,” he said.

The minster revealed that government’s role in the partnership will not only stop at establishing the processing facility, but also improving the road network to the operation area, extension of electricity, connection of clean and safe water, agronomical and production research, pest control mechanisms, post-harvest handling, marketing, irrigation, mobilization and business skilling trainings and ensuring modern agro-processing technologies, among others.

Dr Julian Adyeri Omalla, the Delight Uganda proprietor and chief executive officer, welcomes the partnership and describes it as a timely redemption from the challenges northern Uganda faces as communities fight their way out of poverty through primary fruit production.

She highlighted the company’s journey with the out-growers as a great milestone because they had moved significant steps into harnessing sustainable agriculture, only that, because fruits are perishable, the stakeholders would face marketing challenges, especially in case the farm supplies outstrip demand.

“We are happy that we have had other partnerships before that helped to push us to a point where we are currently, but now our confidence levels are even higher as government comes in to support us along the different nodes of the value chain up to the apex where we are going to be selling processed juice from our own farm production… the benefits will be overwhelming,” she notes.

Delight Uganda has, over the years, mobilised and engaged more than 25,000 vulnerable farmers to grow mangoes, orchards intercropped with short-term seasonal food crops for income and sustainability. It employs more than 1,000 people, sells locally and exports farmer-aggregated products to regional markets of Kenya, Tanzania and South Sudan.

According to Omalla, other partners that have been supporting Delight Uganda include, but not limited to UN Women, aBi, Enterprise Uganda, Private Sector Foundation Uganda, National Agricultural Advisory Services (Naads). At the same event, Finance minister Matia Kasaija told the audience that attended to witness the signing of the memorandum of understanding that the development was one of government’s relentless interventions seeking to ensure the country is food-secure and the populace earns disposable income.

He revealed that the project is going to be executed and strengthened by different government ministries, departments and agencies, including the ministry of Agriculture through Naads, Uganda Development Corporation, Rural Electrification Agency, Uganda Investment Authority and Uganda National Roads Authority.

“This partnership is a milestone in government’s endeavors to support local investors, ensure farmers are food-secure, employed and commercially engaged,” Kasaija noted.

The minister observed that the country needs to prioritize agriculture over other sectors like oil and gas; for the population has for centuries been relying on agriculture, relies on it now and will continue relying on it for many more centuries to come, even after oil and gas have been depleted.

Charles Ocici, the Enterprise Uganda executive director, commended government for the development, which he described as a foundation against which the rural population will continue appreciating and harnessing agriculture as a business, a roadmap that will gradually make Uganda attain the status of an agricultural country whose citizens are neither hungry nor poor.

“Enterprise Uganda is equally proud to be associated with Omalla with whom government is partnering. Through executing our business skills training mandate, we have been moving along with her as she walks her journey of success, touching thousands of livelihoods, to the level of being accorded prestigious recognition across the globe,” he said.

She emerged top and walked away with the Inclusive Business accolade. Ocici congratulated Delight and out-growers upon reaching that important stage of the value chain and cautioned them against taking the partnership they have with Delight for granted, saying they have to observe a high level of integrity through working in line the rules and regulations that govern their relationship.