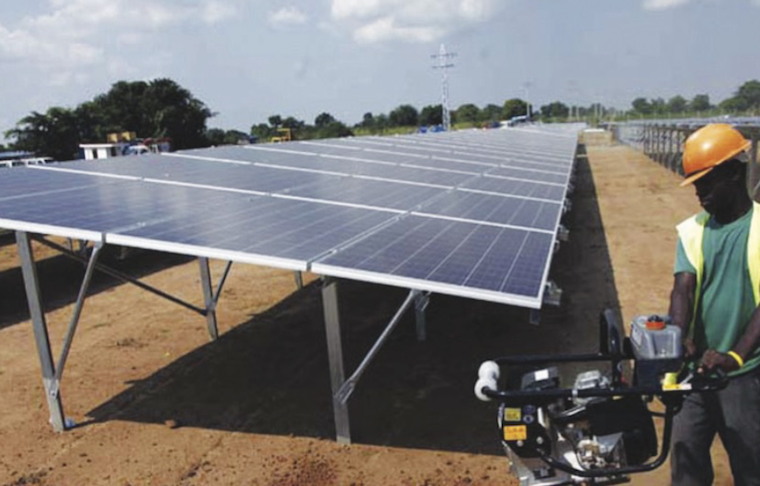 Five years ago, Uganda had no solar electricity connected to the national grid.

Hydroelectricity accounted for more than 90 per cent of the electricity on the grid. Demand for electricity was going up as new factories were set up, and the population grew. But now, a number of new electricity plants are coming up so much so that transmitting the power is turning out to be a challenge.

Today, officials in the ministry of Energy and Mineral Development are worried that electricity supply is moving at a fast pace that the country might not be ready to evacuate it from the generation facilities onto distribution lines. While solar electricity accounts for a small percentage in Uganda’s energy mix – 4.73 per cent - it has attracted a lot of investor interest over the years.

The demand by developers of solar electricity is overwhelming that the Electricity Regulatory Authority recently issued new guidelines to try and slow down the applications for permits from investors.

“The Authority continues to receive Expression of Interest from intending developers in grid-connected solar power and wind power generation,” ERA wrote in a recent notice.

It added: “Whereas this is an initiative that should be encouraged and promoted, especially in view of Uganda’s solar potential and the national aspiration to increase electricity generation to stimulate industrialization, economic and social development, there is need to carefully plan and match the demand and supply of electricity...”

Authorities at the ministry of Energy want to be sure that electricity produced from solar and wind can be evacuated and still maintain the stability of the grid. Uganda currently has 60MW of solar power connected to the grid, still a small amount compared to the overall production capacity of 1,268MW.

By September, there were at least two investors undertaking studies for a combined 30MW of solar power. Now, before any investor can receive any license to undertake a solar project, the authority must be sure that the Uganda Electricity Transmission Company Limited (UETCL) has the capacity to evacuate the power.

The shift in policy points to the growing confidence that developers of solar and wind projects have in Uganda. But how did Uganda get to this point? GET FIT Perhaps nothing activated investments in Uganda’s solar electricity than the introduction of the Global Energy Transfer for Feed-in Tariff (GET FiT) programme – a partnership between the development partners and the Government of Uganda.

Launched in May 2013, the GET FiT programme was meant to attract investments in renewable energies with a production capacity of 20MW or less. The projects were supposed to be clean

energies that are climate resilient and can reduce carbon emissions. Under GET FiT, the development partners – the United Kingdom, Germany, Norway and the European Union – contributed financing towards the private power developers through a top-up on the tariff. This financial support from the development partners was supposed to leverage about $375 million to private investors.

The World Bank offered partial risk guarantees to these power projects. At the time of the launch of GET FiT, the prices of solar technologies were generally high, according to different reports. For many investors, it did not make sense to put up solar projects in a country such as Uganda for fear of failure to recover their capital investments.

Project developers recover their investments through the electricity tariff they charge. Expensive projects usually attract higher tariffs, a burden that is passed on to consumers.

Also, while Uganda recognized its potential to generate solar power, the country had excluded this type of energy from a set of new policies it had just introduced for renewable energies, known as the Renewable Energy Feed-in-Tariff guidelines. The guidelines were first introduced in 2007 and run for two years to 2009.

The second phase of REFiT started in 2012, and they mainly targeted hydropower projects. SMALL HYDRO PROJECTS For Uganda, much of the attention of the GET FiT Programme was on developing small Renewable Energy projects with a capacity between 1MW and 20MW, which would not only boost the supply on the grid but also increase access to electricity in rural areas where, at the time, fewer than 10 per cent of the population had grid-connected power.

According to the Electricity Regulatory Authority, one of the goals of GET FiT was to significantly improve “access to energy for at least 150,000 additional households (approximately 0.9 million people), especially in rural areas due to added capacity and strengthening of the rural grids.”

Some of the sites of the small hydro power projects in the rural areas, such as Siti I and II in Bukwo District and Nkusi in Kibaale District, are located in tricky terrains with somewhat impassable roads where few investors dared to go. There needed to be a catch for any investor to commit funds to sites located in such areas.

That catch was GET FiT. Dr. Norbert Kloppenburg, then a member of the Executive Board of KfW, the lead agency for the development partners under GET FiT, said in 2013 that “After the launch of the first Request for Proposals in March 2013, we were overwhelmed by the positive response from the private sector. This proves that with well-targeted support, private investments can be attracted into the energy sector in developing countries.”

According to the GET FiT Uganda report for 2019, “at the end of 2019, approximately 50 per cent of all energy generation projects in the country were procured and supported by the GET FiT programme.”

A few more projects, however, are running behind schedule for their commissioning, partly due to the effects of the coronavirus pandemic, and in some areas the flooding.

Due to their short turnaround time during construction – some projects take as less as three months before being commissioned - solar became a popular form of energy for power developers.

Access Power, the developers of the 10MW Soroti solar project, commissioned the plant in December 2016, opening the country to more investors in that space. The plant was the first in Uganda and the largest in East Africa at the time. One more solar plant was commissioned under GET FiT.

With more interest in this form of energy, the development partners have broadened their intervention and directed support towards the evacuation process of electricity. According to the GET FiT annual report for 2019, the programme “is supporting upgrades to the 33 kV transmission grid infrastructure in Western Uganda to ensure full evacuation of five projects, as well as an upgrade of the Opuyo substation in the East.”

And yet, it is not its intervention across the board that GET FiT programme is only known for. The programme, which is now winding up, has sparked off interest from local entrepreneurs, and for the first time seen local Ugandans become key shareholders in clean power generation projects.

Unlike before, at least three hydropower projects – Nkusi, Kyambura, and Waki – with a combined output of 22MW have local ownership, according to the GET Fit 2019 annual report. The same report notes that “the programme has also delivered on local content by creating approximately 10,000 jobs, comprised of circa 90 per cent Ugandan employees, spurring the local economy.”

At least 150MW of electricity will be connected when all the projects under GET FiT are commissioned. In the end, GET FiT, thereby, has become a programme of firsts.

As the GET FiT programme prepares to close, it has left the country with a bit of homework to do – how do you attract the same kind of investor interest in the transmission and distribution segments?

0 #1 Kabayekka 2020-11-21 06:51
The transmission and distribution is a must so that UMEME can start to compete with the rest of the dealers in modern international energy production.

With the tropical environment around the world suffering destruction to become desert continents or equatorial hot zones like on planet Mars, the emergency measures to stop the poor populations from using firewood are inevitable.

Solar and Wind energy installations should be covering much of these tropical hot zones. The price of energy will gradually subsidise.
Report to administrator
0 #2 Kabayekka 2020-11-21 07:04
Surely, a family in the tropical climate does not need to use much energy especially in terms of warming the house!

The critical demand for home energy is daytime food cooking and 3 to 4 hours night time light. It is possible for such human energy demand to cost half a dollar each day.

Presently for UMEME it is costing a fortune for the low income electricity consumers in the tropics.
Report to administrator
0 #3 Kabayekka 2020-11-21 22:51
What is interesting is that UMEME is being paid handsomely by the taxpayer for the energy produced but not used up!

Even if electricity distribution breakdown is still the order of the day in this poor country.
Report to administrator
0 #4 Kabayekka 2020-11-23 16:15
Despite the technological development in hydro, solar and wind high energy production, much of the population fear economically to use this God sent energy!
Report to administrator