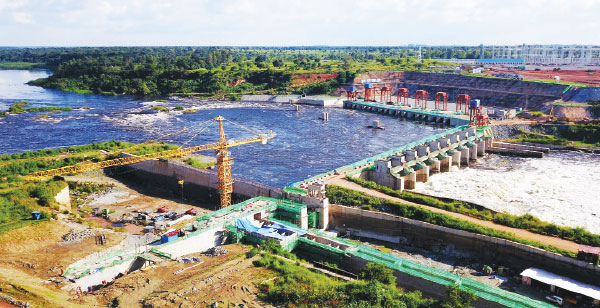 If all goes according to plan, the Karuma hydropower dam will be connected to the national grid before the end of this year, a move that could bring down the cost of electricity in Uganda.

The dam, with a capacity to generate 600MW, will be the biggest hydropower plant in the country. Already some of the six units – each with a capacity of 100MW – have been tested. Also, the tailrace tunnel two was filled with water, with the Uganda Electricity Generation Company Limited, the owners of the asset, describing it as a major milestone.

The tailrace tunnels at Karuma, which have a combined distance of close to 26km – longer than the entire stretch of the Northern bypass - discharge water back into the river after generating power. Uganda Electricity Generation Company Limited places construction works at Karuma hydropower dam at just over 97 per cent.

During the inauguration of the new members of the board of the Electricity Regulation Authority in early October, the chairperson, Dr Sarah Wasagali Kanaabi, emphasized the need to bring down power tariffs in the country. To do that, the board might have to look at bringing down the cost of generating power as one of the solutions.

The Karuma power dam is expected to have the lowest tariff in the market, at USA cents 4.16/kWh. When calculating the power tariff consumers pay, the generation cost is the most important factor. According to the Electricity Regulatory Authority, the percentage contribution of the generation cost to the average weighted end user tariff is 65 per cent, the largest in the basket of factors.

When Karuma is fully commissioned, the figure for the generation cost will go down further. It has been a long journey to getting Karuma dam on the grid.

About 20 years ago, Uganda had a generation capacity of close to 400MW, mainly from the Nalubaale dam, sometimes known as the Owen Falls dam, and the Kiira dam. Thereafter, in 2001, Uganda started scouting for investors to manage the Nalubaale and Kiira dams by issuing competitive bidding documents.

Since there were no restrictions on how much water a dam could use, Nalubaale was operating at a high plant factor of more than 90 per cent. Nalubaale was a lucrative venture for any investor.

On top of Nalubaale and Kiira dams, there were promises of starting construction of the Bujagali hydropower dam. In some government quarters, there were hopes that the American company, AES, would meet its target of commissioning the Bujagali dam by 2004, which would add to the energy output in the country.

However, while Uganda handed Eskom Uganda Limited – a subsidiary of South Africa’s Eskom Holdings Limited – a 20-year concession to run the Nalubaale and Kiira dams, allegations of corruption dogged the Bujagali project, with the investor pulling out.

And then in the year 2005 began the start of a prolonged drought in Uganda. Due to the drought, the water levels of Lake Victoria, a key source of water for the dams, reduced. It was partly due to the drought that the directorate of Water Resources Management introduced a water permit system in the same year, which capped the amount of discharge that the Nalubaale and Kiira dams could release. As such, power output slumped.

Still in 2005, government decided to license thermal power plants to cover up for the drop in hydro electricity. Companies such as Aggreko, Jacobsen, and Electromaxx were given licenses to generate electricity over the next couple of years.

Due to the high cost of generating electricity, the government subsidized the power tariffs to allow customer affordability. On top of the subsidies, government instituted a loadshedding schedule to ration access to power.

It was not until around 2010 that water levels at Lake Victoria started going up, boosting power output. In 2011, government removed the subsidies on the tariff.

“While the intervention addressed the power supply deficit, thermal generation increased the energy purchase costs significantly. It is, therefore, not unreasonable to expect that Uganda will in the future experience poor hydrological conditions that will reduce dispatch from hydro plants and, therefore, the need for generation from other sources,” ERA notes in one of its document, explaining the need to keep thermal plants.

The commissioning of Bujagali helped to attract more investors into the country’s power generation space. The dam attracted the largest size of investments from institutions such as the World Bank and the African Development Bank. The Bujagali dam also helped boost the credibility of Uganda’s electricity supply industry, and attracted other investors.

Those investors are now spread over different segments such as solar and bagasse. For example, by the early 2000s, Kakira Sugar Works was the only company generating electricity from bagasse. At the time, the sugar company had a generation capacity of about 4.5MW. Today, the company is at 52MW.

More sugar companies are now generating electricity, with the close to 100MW of bagasse now accounting for eight per cent of the total energy output, according to the 2019 Electricity Supply Industry performance report by ERA. Solar energy is another new form of energy that has attracted investors over the last five years. Five years ago, there was no solar power connected to the grid. Today, that amount is at 60MW, accounting for four per cent.

Development of solar power has been supported by a class of development partners under the GET FiT programme, where the tariff from these power generators has been subsidized.

It is partly from that support that at least 51 per cent of Ugandans have access to electricity today, according to government figures, compared to less than 10 per cent two decades ago.

Uganda is targeting to have 17,000MW of generated power by 2030, an ambitious target from the current 1,252MW. Government might have to look at developing new sources of energy, such as geothermal and associated gas reserves, to meet its target.

As at September 2020, there were 19 proposed power projects at permit stage in different parts of the country, whose developers are undertaking feasibility studies for the proposed generation projects, according to the latest figures from ERA.

The total planned output for these projects is 1,150MW. Among the planned projects is a new form of energy from associated excess gas.

After Uganda discovered oil and gas reserves, a number of companies have shown interest in generating electricity from associated gas. Uganda has a capacity to produce more than 200MW from the associated gas reserves discovered so far. Less than 40 per cent of Uganda’s prospective oil blocks have been explored.

It is anticipated that when Uganda starts oil production around 2024, a substantial amount of the oil money will be committed towards energy generation.