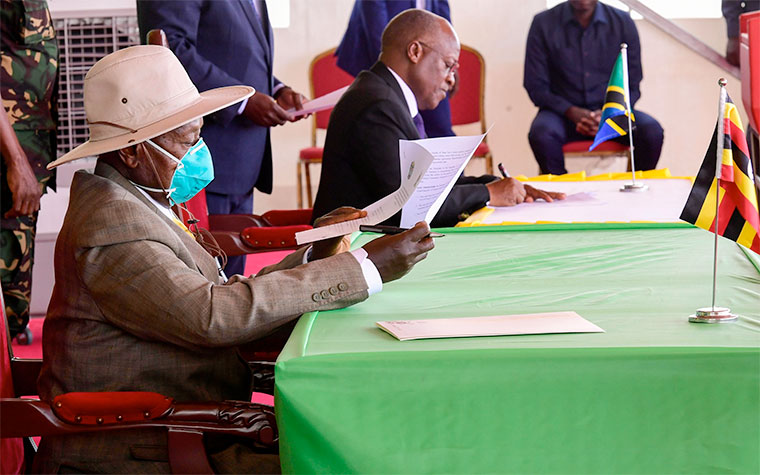 It took months of give-and-take negotiations between Uganda, Tanzania, and French oil major Total to get to initialing the Host Government Agreement (HGA) for the East African crude oil pipeline over the weekend, with the most critical issues surrounding the safety nets for the billions of dollars that could be committed to the project.

Patrick Pouyanne, the chairman and CEO of Total, and President Yoweri Museveni met at State House Entebbe, where the two officials agreed on “the conditions of entry of the Uganda National Oil Company (UNOC) in the project as well as on the Host Government Agreement (HGA) which will govern the export pipeline project in Uganda,” according to an statement by Total.

Total is the lead company for the crude oil pipeline. The statement did not clearly define what the conditions of entry for UNOC are, although during the negotiations, government has tried to push for more veto powers to be accorded to UNOC.

The veto powers are to be decided by the amount of shareholding one holds. UNOC’s participating interest in the pipeline project had earlier been pegged at 15 per cent – a low percentage that would not give it enough voting powers.

However, it has been agreed that as soon as Total recovers its money through the sale of just over a billion barrels of crude through the pipeline, UNOC and Tanzania Petroleum Development Corporation would take a controlling stake in the pipeline.

After the meeting at State House Entebbe, Museveni flew to northern Tanzania, where he met President John Pombe Magufuli where the two agreed to speed up any processes that would lead to the start of the construction of the pipeline.

“In principle, we agreed that our governments expedite the harmonization of pending issues in the spirit of the East African Community (EAC), the remaining agreements be fast-tracked including the Tanzanian HGA and we quickly carry out the implementation of EACOP project,” Museveni said on his Twitter handle.

The two parties did not divulge the key contentious details that had been resolved. However, in the end, Tanzania and Uganda nearly had similar issues of concern. The most common issue was the legal framework for the proposed 1,445km oil pipeline.

While Uganda prefers a new law for the pipeline, the government of Tanzania argued that there can be some new policies for the pipeline although that should not constitute a change of law but, rather, a change in circumstances. The Tanzanian government also noted that “only chang­es in law that substantially affect the economic equilibri­um of the project should be included in the HGA.”

The government further added that they planned “to stabilize only the fiscal package offered to the project.”

Total E&P, being the lead negotiator on behalf of the oil companies, is concerned that “unless the economic equilibrium of the project is well defined, all the circum­stances that have the Change of Law Effect will have to be included in the HGA.”

The element of tax has been a signature issue in the last 10 years of nearly all negotiations between the government of Uganda and the oil companies. For these particular negotiations, Uganda allowed Total to create a project company located in the United Kingdom but stated that the branch will be located in Uganda for tax purposes.

When it comes to settling disputes, as is common with such projects, Uganda and Tanzania appeared to depart. While Uganda pushed a position that would allow disputes to be handled by local courts, Tanzania agreed to move that to an international court of arbitration, something that Total favours.

Now that most of the key issues have been resolved, Total is going to try to move towards achieving the final investment decision for the pipeline, a commitment to spend money. While Total has in the past said it would achieve FID before the end of this year, the timeline looks quite ambitious.

The signing of the HGA makes the 1,445km crude oil pipeline bankable in the eyes of the financiers. Up to $3.5 billion is expected to be spent on the pipeline.

Experts believe that the speedy process with which the negotiations were handled over the last couple of months was down to jittery capital markets around the world, where funds for such a large and fairly risky project like the East African crude oil pipeline were drying up.

Also, the growth of electric cars, which ideally eat into the demand for oil, and the deafening voices of environmentalists against investments in fossil fuels is something that government technocrats in Uganda were getting concerned about.

But the most important element of the negotiations was a gradual shift in mindset among government technocrats, who now agreed to move towards getting long-term gains ahead of the short term.

It increasingly became clearer that government’s push for taxes in the short term would make it harder for the project to thrive. Instead, extracting more revenue in the long term is a position that government now appears to embrace.