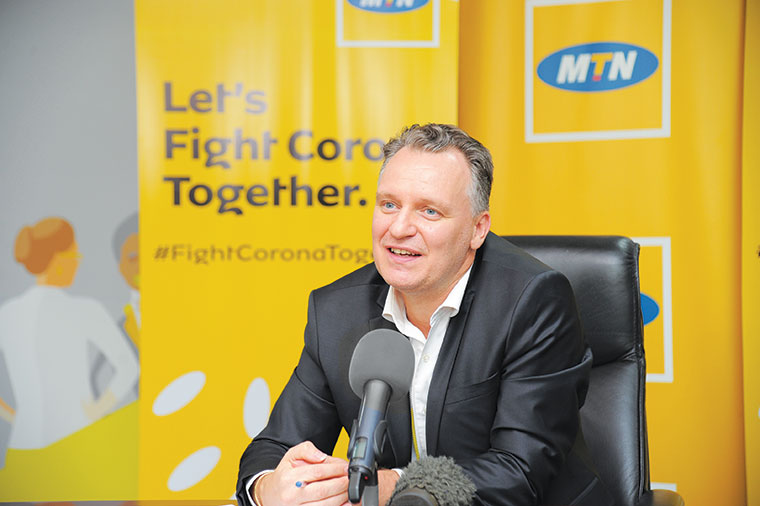 MTN Uganda has just had its license renewed for the next 12 years. Jeff Mbanga interviewed the company’s CEO, Wim Vanhelleputte, about what this means for the market.

MTN has just had its license renewed for the next 12 years after two years of negotiations. Briefly, why did the negotiations take that long and how did you come to a resolution?

It is true that the negotiations took quite long. We started the whole process of applying for a license extension in October 2017 and concluded in June 2020; that is two and a half years.

So, it is fair to say it took long. But these are difficult discussions. On one hand, you have the expectations of the regulator [government], which is an expectation of a certain amount for a license fee. On the other hand, you have us who look at it as a business investor. It has to make business sense.

You are not going to pay for an operating license without a solid business plan or a business projection. So, those two needed to be balanced. Of course we wanted the amount to be less, while the authorities wanted it to be higher. So, where do you find the balance between the two interests?

That is what took time. If the amount had been much lower, I suppose it would have taken less time. But the amount was a bit on the high side, and there is no secret around that. We always felt the amount was high compared to regional benchmarking in neighbouring countries like Kenya in particular.

And so, we negotiated around the other side, in terms of what you get in return. We looked at the duration of the license, the obligations of the license, the resources you get allocated to fulfill those obligations. And we finally got the balance right. So, somehow we came to a conclusion in March when our group chairman came for an official visit and we found the balance between the two interests.

What were some of the conditions for this license renewal?

There are obligations. There is of course the $100 million payment for the license. But it goes beyond that, such as the network infrastructure. We have committed part of our obligation to invest $300 million over the next five years to enhance the coverage.

So, that is one of the things that we have been able to reduce as a compensation for the high license fee. Of course you understand that covering 95 per cent requires more investment than covering 90 per cent. Then there is also the listing obligation, where 24 months from now MTN Uganda has to go to the stock exchange with at least 20 per cent of its shares.

Should we expect an Initial Public Offer or will it be a private placement?

It will be an Initial Public Offer, because it is a public listing. The idea is to open up to the public. It is an exciting opportunity for us to turn our customers into shareholders. That does not happen often; it is a once-in-a-life opportunity that you can really engage with your customers and see how they can participate in the returns of your company.

It is quite unique to go to the stock exchange through an IPO. We believe it is an opportunity to strengthen our ties with the country, and also with our customers and all the stakeholders. So, we look at it much more as an opportunity than an obligation.

The Uganda Securities Exchange (USE) has had challenges attracting investors to the market. How much confidence do you have in the USE? What would you like to see, in terms of policy regulation, at the USE? And do you think MTN will turn around the fortunes of the USE?

It is true that the USE has not been able to attract so much volume. The trading volumes are relatively low. It is a small trading place. Very few titles are being traded. And over the last few years, there have not been any big IPOs. Cipla has been the only one in the last five years.

So, these are questions we are asking ourselves. How is this going to turn out? It is unknown territory for all of us. But I think this company and the brand and the value that it stands for, and also the strong performance of this company, I think we are going to surprise everybody.

This is exciting stuff. If you look at MTN Ghana, where we listed more than a year ago, it has been a great success. We have been using mobile money as an opportunity for customers to buy shares. There are more than 140,000 Ghanaians who own shares in MTN Ghana, and they have bought them through the mobile money platform.

So, when you think about that, then maybe something similar can be possible in Uganda; so, who knows? Maybe we can tap into small investors that have a million shillings or Shs 500,000. So, if you can get thousands of those, that is as good as one or two big shareholders.

What is your impression of the new licensing regime? If you feel it is not fair, are there any changes you would like to see in terms of telecom regulation generally or maybe with the regards to the license renewal?

What is happening now is that a new licensing regime was gazetted in November 2019 in line with the new broadband policy. So, the new licensing regime has all the changes that were needed because of technology [advances] over the last five or ten years. Some of the Acts were outdated.

There is a whole section on it about license fees. So, anyone coming to Uganda knows exactly what fee they have to pay for what license. That is a major step forward compared to five years ago. So, there is a lot of clarity in the industry. There is full transparency.

That is a good thing. When there is transparency, there is clarity on the business plan and on the returns. There is a major element of uncertainty that has been taken away with the new licensing regime.

As an investor, you need to know what framework you are working in. And that has been a challenge over the last few years. Now that all has been clarified, it creates the right framework for people to invest and deliver high quality service.

Do you think there is more room for more players to come into this market?

I don’t know if there is more room for more players. There are already or six or seven players. Is there room for another player; I don’t know. But at least what there is room for is that the existing operators can continue working within the new framework.

Maybe we will go from seven operators to four or five operators; I don’t know. But at least there is clarity. And there is room for more than two operators. Today we have MTN and Airtel as the two big operators. The new licensing regime allows the smaller operators to also have a viable business case, which in the old regime might not have been the case.

It is a leveled playing field, and it is fine. Let the customer make their choice between quality, pricing, brand affinity, loyalty and so on. So, it is okay. Let there be a bit of healthy competition. It is good for all of us.