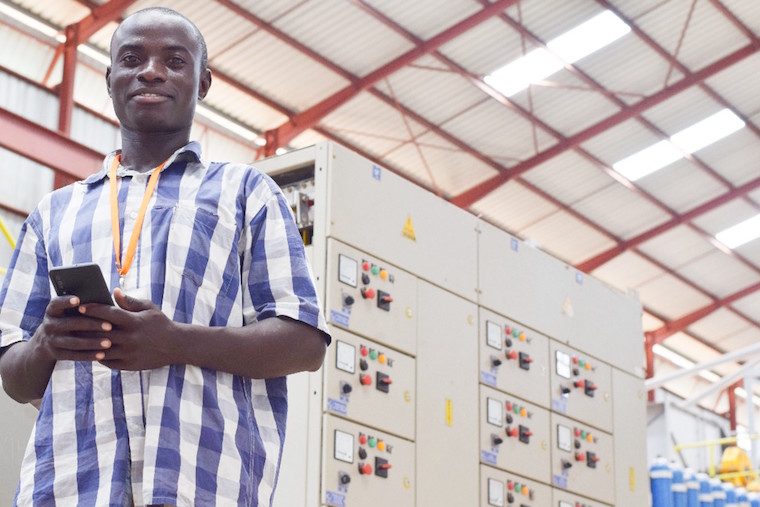 Abdu-Karim Katende at his workshop

Few things can prepare you for ABDU-KARIM KATENDE, a virtuoso in metal fabrication.

At just 27 years, Katende has already achieved what many white-collar corporates in Uganda can dream of. He is a landlord, owns a fleet of multi-purpose vehicles, employs and trains people to master the craft of fabrication. Most importantly, he mastered his craft through self-learning, writes Yudaya Nagonzi.

In the shanty Kampala suburb of Kyebando, there is junction along Tirupati road that renowned to have attracted high-end cars. On the many times I have used the path, I have found an expensive BMW X5, a Nissan Infiniti and different brands of 4X4s.

Interestingly, it was not until recently that I got to know why these cars park in this crowded area near metal workshop. It so happens that they drive all the way to meet Abdu-Karim Katende, the owner of the workshop.

Personally, I did not know Katende until the recent Covid-19 pandemic when he led a team of well-wishers to unblock the village drainage system, an activity popularly known as Bulungi Bwansi. For those who may not know, Kyebando is one of the most flooded areas during heavy rains.

In our engagement, he came off as a strong, rough youth and I initially thought he was a mechanic or carpenter due to his blue overall. That is until the conversation reached his ‘office’ where he dictates matters.

“I’m the boss here and people who need my services often come here for first-hand information and practical experience,” he told me. Here, there is an assortment sophisticated metallic machines I cannot even comprehend and Katende could only tell me their use. “I fabricate fish feeds machines, adhesive machines, briquettes machines, bar-soap making machines, bakery machines, maize-milling machines, windows and doors,” he said.

“I make many of these on order from clients. I don’t have a marketing network and I greatly rely on recommendations of my clients to bring new clients.”

Business is indeed booming. He has a group of youth waiting for him to take them through the complex work of doing these machines. I also get to understand why posh cars park at the workshop. I also notice that he has pending orders. But the question that lingers most is how this young man got the nous to attract such big-time clients.

“I grew up in a very poor family. I was the only boy with two sisters; my father used to work at a welding workshop in Katwe and I used to follow him there occasionally and he would give me simple tasks,” he says.

“I spent most of my there learning from him. I learnt to do basic metal fabrications like a money safe and my grandmother regularly praise my work. Unfortunately, my mom separated with my dad when I was young. One day, my dad told us that he had to retire from the job because he was losing his sight because of his limited protective gear during welding.”

This opened Katende’s eyes to the challenge that lay ahead, and it was in 2008 that a 15-year-old Katende got fully made up his mind to join fabrication.

“I got my father’s toolbox and became his personal assistant, learning everything he did because I had realized my life depended on fabrication,” he says. Within months, Katende had mastered the trade but he went a notch-higher to indulge himself in complex machines.

“I realized that ordinary metal fabrications like popcorn machines were popular, but everyone was making them and, therefore, their price was low,” he says.

“That is when I set out to learn and master how to make complex fabrications because the demand was high yet there were few experts.”

That journey meant Katende had to self-teach himself in the absence of experts.

“I visited many top metal fabricators in the city but there were few opportunities, but I discovered I could use my experience to learn this online on YouTube or through trial and error. I am grateful to Musa body in Katwe for skilling me, Juma Sekamatte of Central engineering, and Muhammed Bossa. These people helped me a lot.”

With time, and with more consultations, he perfected my art and became an expert in unique machines.

“I started specializing in machines which aren’t even in the local workshops and Chinese shops. These include the chicken defeathering machine, clay bricks extruder, manual brick machines which produces over 50 bricks per batch, fish pellet machine, fully-automated concrete block machine and the automated honeycomb machine,” he says.

“By the way, I also started to do the manual interlocking bricks machine and it became very popular.”

Life was never the same for Katende, who skipped formal education to pursue his career goal of being a master in metal fabrication.

HOW DOES HE DO IT?

Katende contends that before commencing work, he first agrees with the client on key aspects like budget and time frame.

“It depends on the affordability of the client to pay a commitment fee in time. Work normally takes between two weeks and one month and I fully dedicate that time to nothing else. Katende employs five people at his workshop and intimated that some of his clients are people who seek repairs on machinery they bought abroad.

“There is a client who bought a chicken de-feathering machine from China but when it broke down due to a power surge, the company where he bought it from told him to ship it back for repairs. When he realized it was going to be more expensive, he brought it here and after studying its technology, I repaired it in just a day and saved him a lot of money,” he says.

“Since then, he recommended many people who had been stranded with similar machines. I feel so great when a first-time client tells me he came here after an endorsement from another client.”

Katende has a special book for clients’ assessment of his work and the sheer volume of high-profile people is amazing. Among them is Robert Kyagulanyi, who noted that people like Katende should be supported by government to improve their skills. Others include Julius Peter Moto, Uganda’s ambassador to the United Kingdom, and Col Jude Rukubya, among others.

“I have met people I have never expected to meet in life and that gives me a lot of joy that what I do is special,” he says. That said, Katende says his biggest challenge is the high tariff rates on electricity.

“It takes a meticulous process to do good work and clients who can afford my machines are few since I’m not working at an industrial level. But each month, a substantial percentage of my income goes to paying electricity bills,” he says.

“Meanwhile, I also have a challenge of tools and materials to use on machines because they are expensive. There is also the problem of power shortage which leads to burning of clients motors since our power is not constant.”

Now, Katende acknowledges that businesses during the lockdown is slow since the people who can access the workshop are restricted, but it has also given him an opportunity to try out new skills in metal fabrication.

“I have developed new designs in the past few weeks and right now I am able to make unique doors, windows, staircase handrails, dining tables and so on. I also recently added adhesive machines to my collection, and I have partnered with an entrepreneur to do a machine that makes soap and sanitizers.”

Katende hopes to build his company to bid for major contracts.

“I’m still working on small contracts at personal level but I hope to partner with a big firm to work on major government and private projects because I have the skills and expertise to excel,” he says.

“Nothing humbles me than seeing engineering professors coming to me to fix their work. It shows they value my work and I have the capacity to even get better.”

Indeed, the sky is the limit for Katende.

You need more specialised tools and equipment and even finances. Have you tried UIRI? Am told they exist to help people like you.
Report to administrator