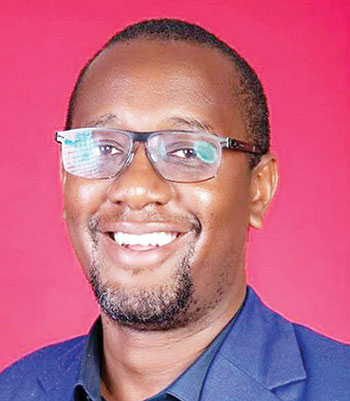 Until his untimely death in a car accident on March 15, Thomas  Walusimbi was one of the most recognisable figures in the branding and advertising industry.

He was the creative brains behind several leading brands such as Uganda National Oil Company (UNOC), Uganda Breweries, Pepsi and Airtel, among others. As David Lumu writes, his stock was approaching his peak when a fatal motor accident cut short his life. He was 42 years old.

Affable in character and dedicated to work, Walusimbi was one of the most sought-after individuals, especially when it came to creativity. Quick-witted, he had a knack of formulating concepts in a short time and being a hands-on person; Walusimbi designed several logos and coordinated some of the biggest branding, advertising and communication campaigns.

Yet, in spite of all this, he always preferred to remain behind the scenes to let his work do the talking. Even when you would bump into him at corporate events, he loathed the limelight. Yet here was a man whose works helped build the images of several organisations.

He also had a trademark smile that would charm anyone. For more than 20 years I knew Tom, I never saw him in an argument yet oftentimes people took advantage of his generosity to defraud him.

My first encounter with him was in the nineties as young boys who usually met at Makerere University’s football ground. Tom, as most peers called him, loved humour and often created a jolly atmosphere during hard times. With Tom around, there was never any negative energy but one thing that struck me most was his love for gadgets.

That love for gadgets influenced his decision to study Electrical Engineering at Kyambogo University, but when it came to work, he quickly established himself as a creative graphics designer in the early 2000s. Our paths would meet again when he worked at advertising firm Moringa Ogilvy as I worked with one of its subsidiaries.

Here, Tom was the graphics designer. He quickly cut a niche for his speed in doing artwork and layouts. The journey in the corporate world saw him enjoy stints at several leading marketing and advertising firms before he settled down a few years ago to found LiveWorks in 2017.

Meanwhile, Tom also mentored quite many people and personally introduced me to graphics designing. Looking back, I feel lucky to have worked with Tom on several projects.

Tom leaves behind wife Marsha and three children; two daughters and a son. Tom was a sociable person and he never shied away from expressing his love for vintage manual cars. I remember sometime in 2002 when a friend lent him a Volkswagen [Kombi] for a few days. Tom instantly fell in love with the car and vowed to own it one day.

For years, however, Tom failed to get the Kombi of his dreams but instead settled for a vintage Land Rover famed for being powerful and hard. Tom transformed this Land Rover from scratch to become a classic car that was the envy of many road users.

On the fateful night, Tom was returning from a vigil when he lost control of the car at the dangerous spot in Naalya along the Northern bypass. He died on the spot. At the time of his death, Tom was the deputy secretary general of Uganda Advertising Association.

What others say about Walusimbi

Sending our heartfelt condolences to the family of the late Thomas Walusimbi for the loss of a great son, father, husband, friend and true creative spirit. Thank you for your creativity, time and contribution towards the ‘Running out of Trees’ campaign.

It is with utmost sadness that I communicate the death of Thomas Walusimbi. He was central to UNOC’s branding. Specifically through LiveWorks, he facilitated development of our website, our key gateway to external stakeholders.

Thomas designed our company logo, the “heart” of our corporate identity in addition to other branding and educational materials. Most of the services he offered to UNOC were at no cost, an exemplary virtue.

Thomas was a kind man, development and always had his focus on the impact his skill and work would have on others and the country more than his personal benefit. As a family, we are saddened by his passing. We, however, thank God for his life and for his noble contribution to the oil and gas sector and the nation at large.

Our thoughts and prayers are with his family amid this difficult time. May his soul rest in eternal peace.

Thomas was a very close friend to us and an active member of the Club. We are united with his family in grief and will dearly miss him. May his memory be a blessing and his soul Rest In Peace.

Tom’s remarkable contribution to the creative/advertising/communication industry will not be forgotten. May God strengthen his family & friends.

Can’t find the words. Glad we spoke recently. We had plans. Then this? Sula bulungi mukulu

I guess I met him one time in Annex Hotel during lunchtime.? However,his name was sounding very nice to me and I also adopted to be called Walusimbi as a matter of fun when I was meeting other friends.

Such a night loss.RIP Walusimbi good man
Report to administrator