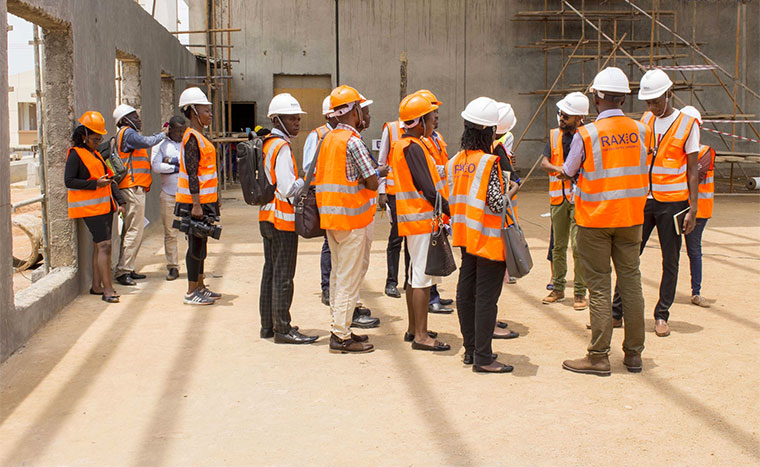 Journalists on a guided tour of the centre

The tier-3 data centre looks to address the urgent need of modern ICT facilities in the country. It will be the first of its kind in Uganda, operating as a carrier neutral facility, able to house around 400 racks at full capacity.

The facility will have a seven-layer security to guarantee safety of client equipment and data. As a world-class data Centre, it will also have an indirect ambiatic cooling system where water will be used to cool the equipment. Besides water from National Water and Sewerage Corporation, the company will also use water from underground.

“We shall be able to operate for 12 consecutive uninterrupted days without water from NWSC,” Jeremiah Kasirye, the Raxio Data Centre site manager, noted. “We are creating a first-class super mutual environment that welcomes all players in the market; colocation is our key service offering.”

Raxio is majorly owned by First Brick Holdings, a US-based company. Ugandans own minority shares in Raxio Data Centre. The data centre is to greatly contribute towards the country’s economic growth in terms of job creation and power consumption.

“This is a power-hungry facility; the installation is a 5MW project which is four times bigger than other data centres in Uganda. More to that, the company will employ up to 40 employees including technicians, explained Abdul-Rahman Ahmed Baguma, vice president, Technology and Operations at Raxio Data Centre.

The $27m data centre facility looks to open in June this year.