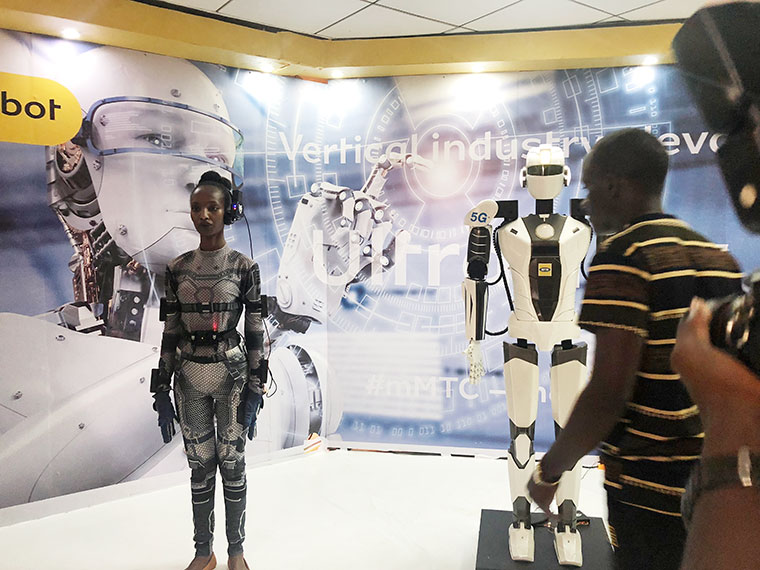 MTN Uganda CEO Wim Vanhelleputte says Ugandans shouldn’t expect any commercial rollout of the 5G network this year because there are no devices on the market to enable this sort of technology.  This came as Uganda Communications Commission (UCC) said they need about six months to set up the spectrum for 5G.

In spite of the damning situation, FRANK KISAKYE analyses why the tech world is getting excited about 5G.

Simply put, the 5G network basically brings more speed at 10 gigabytes per second (600 times more than 4G) and more device connectivity. With 5G, you can livestream or download a 4K High Definition (2160 pixels) movie in just 25 seconds and connect up to a million devices - Internet of Things (IoTs).

Think about a smart refrigerator that detects that your grocery supplies are running out and places order deliveries at your grocery store. In 2018, Alibaba launched a manless Flyzoo Hotel in Hangzhou, China. Right from checking in and checking out guests, making beds, room service, laundry services, no humans are involved - just robots.

5G is meant to enhance even more such seamless and stable connections through network slicing. More connections don’t mean a slowdown in speeds as with the current 4G network.

There are questions as to why the telecoms are jumping onto the 5G network even before some have completed rolling out the 4G, let alone 3G. MTN’s Vanhelleputte said in technology, leapfrogging and skipping steps in the development curve is the norm, especially for developing countries. Before the entire country got covered by fixed telephone lines, Uganda skipped to mobile phones.

Before everybody had a bank account, mobile money created a digital bank account. He said with 5G, Uganda will now skip another step of rolling out fiber connectivity for everybody and go to the wireless connectivity. He was speaking at the showcase of the 5G network at the MTN offices at Nyonyi gardens in Kololo.

It is predicted that in five years, at least 1.5 billion of the world or 1/3 of the population will be connected to 5G technology.

“It is very significant in our country, our villages and our places where we work. We shall be able to benefit from these connections without going to foreign countries abroad. Yes, there might be some villages, remote areas that are getting 4G right now but that doesn’t mean that we can’t start rolling out 3G, 4G and 5G before the entire 100 per cent of the country is covered. Every place, every application is moving on its own speed. Yes we are catching up on getting 100 per cent full population coverage on basic telecom services but that doesn’t stop us from looking into the future and piloting 5G,” said Vanhelleputte.

He said as more and more 5G-enabled devices and applications are rolled out in the market, it will become clearer for the telecos and users how 5G can impact their daily lives. UCC executive director Godfrey Mutabazi said one area where 5G will immediately impact Ugandans is in telemedicine.

In 2016, the auditor general reported that Uganda spent over Shs 10bn (exclusive of flight and upkeep costs) in the last three years for the treatment of 140 patients abroad. Could 5G save the taxpayers such colossal expenditures? Perhaps, according to Mutabazi.

“It (5G) is a little different from what we’re experiencing now because we are going into high speeds, high delivery. You have heard of telemedicine. In real-time if you’re operating on somebody, for example if you are operating on someone in Gulu and this person is giving you instructions from London or whatever in real-time,” he said.

“We need seamless connections, especially when we go to autonomous cars, internet of things. You have got a fridge at home, you want everything done at a press of a button done instantly... if it is a self-driving car you want it to be dead accurate...We want it (5G) well spread and well connected such that there is no mistake...” Mutabazi added.

Outgoing MTN Uganda chief technology officer Gordian Kyomukama said the current 4G technology has limitations on the number of devices it can connect per square kilometre but 5G multiplies this by one million times. Mutabazi said boda bodas might have to be used as moving masts to extend the 5G network coverage.

Prime Minister Ruhakana Rugunda said government’s wish is to see how 5G will tackle everyday challenges such as unemployment, lack of markets for farmers, among others. He also said the technology shouldn’t be priced beyond the ordinary Ugandans to whom it is meant to serve.

“The volumes of data you were using on 2G were so small compared to 10 or even 100 times more data than you’re using on 4G. So, on 5G, it will be the same and the cost per gigabyte will drastically go down, but you will be using many more gigabytes… the cost of a gigabyte will inevitably go down when the technology advances,” Vanhelleputte warned.

MTN’s 20-year license came to an end in 2018 and it was expected that it would be renewed in 2019. It was also expected that MTN would pay $100m as license renewal fees but this was reduced to $58m by UCC, prompting President Museveni to seek an explanation from the regulator.

To date, MTN still has no license and recently state minister of Finance for Planning David Bahati said the budget was experiencing shortfalls because the money expected from the MTN license hadn’t been paid yet.

“They are operating normally and within the law. We’re into transitional licenses and every operator here today is going through that phase. Some of them don’t have that document [license] but they have got permission from UCC to operate and the law allows that transitioning.”

“So, MTN is fully licensed and it can operate as much as they can because they are operating within the law,” said Mutabazi.

Vanhelleputte further said that the telecoms are operating under a different regulatory regime gazetted in November last year. Under the new regime, he said, the telecoms are supposed to enhance their local partnership and ownership through, among other things, listing on the Uganda Securities Exchange.

“As MTN, we have no problem of fulfilling those obligations. We are the only operator of this size which already has 5 per cent of local ownership. That is why [Charles] Mbire, our chairman, is here today. And we absolutely have no problem to enhance that five per cent to 10 per cent, 15 per cent, 20 per cent as per the requirements. And if the requirement is that we do listing, we will list. If the requirement is that we go for private placement, which means that we engage directly with the private Ugandan owners to buy shares in our company, we shall also do it like that.”

“We are very open and willing to fulfill those obligations. We absolutely have no problem and I think it is even a good thing to enhance our local ownership. And by the way we embarked on that exercise several years ago.”

“We had discussions with NSSF [National Social Security Fund] six or seven years ago to take participation in our company but those discussions did not come to conclusion. But it proves our willingness and appetite to open up our capital and shareholding to local participation has been there for many years,” he added.

We are quite happy with what we have just do not use you service providers to spy and undermine us.

Please!! We shall ban you from our beautiul coutnry.You bet!!!
Report to administrator
0 #3 Kabayekka 2020-02-01 08:08
Unfortunately for Uganda such technology is under the strict control of political and URA interests.