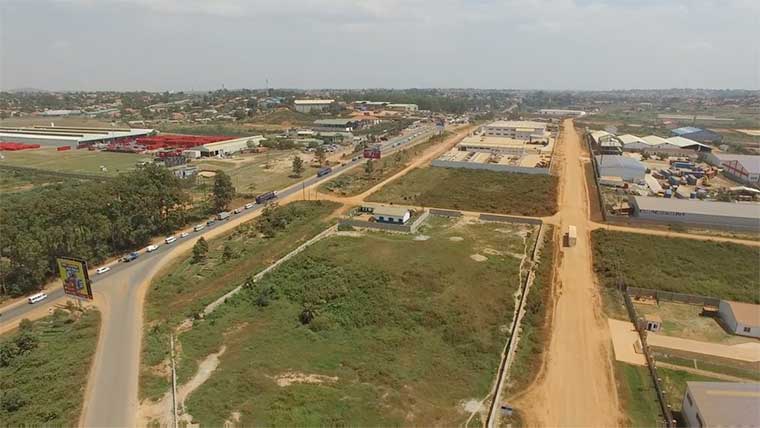 Investors in Namanve industrial park have for a long time complained to the government about the poor infrastructures in the park. The lack of enough street lighting, improper sewage disposal, poor drainage system and lack of tarmacked roads are some of the issues that the investors have been unhappy about. This is about to change, writes ERNEST JJINGO.

Government, together with the United Kingdom government, recently broke ground for a $200 million (over Shs 700bn) infrastructural development project, which will seek to develop key infrastructures within the park.

Out of the 45km of roads in the park, only 7.5km is tarmacked, water supply covers only 10 per cent while electricity covers only 24 per cent. The groundbreaking ceremony, which took place at Steel and Tube industries in Namanve, was presided over by Evelyn Anite, the state minister for Investment and Privatization, Gen Katumba Wamala, the minister of Works and Transport, and the UK minister for Africa, Andrew Stephenson, who is in the country to meet President Museveni ahead of the UK-Africa Investment Summit in London next week.

Speaking at the event, Anite said that the decision to develop infrastructures within the Namanve industrial park is in line with the government’s objective of industrializing the country and creating jobs for young people who are unemployed.

She added that upon completion of the project, at least 500 companies will be established in the park, which are in turn expected to create more than 200,000 jobs for the people. “This means that we are going to get the youths off the streets and start working in these companies and also for Uganda to stop being a supermarket for Chinese imported products because they will now be manufactured from here,” Anite said.

Gen Katumba Wamala said the government is fully committed to lowering the cost of doing business within Namanve industrial park through projects which are underway such as developing the Bukasa port, repairing the meter gauge railway as well as the construction of the Kampala-Jinja expressway.

“These projects will lower the cost of transport and congestion, which industrialists have been complaining about. I thank the industrialists who started investing in this area even before the infrastructures have been set up,” he said.

The UK minister for Africa, Andrew Stephenson, said Uganda has for long been a development partner of the UK and this project is a great opportunity for both countries to strengthen their business relationship and deliver more investment, jobs and growth through increased bilateral trade.

“The UK supports Uganda’s ambition to become a middle-income country by 2040. Boosting infrastructure, enhancing investment and trade and strengthening Uganda’s manufacturing base is vital. That is why I am delighted to be here at the ground-breaking of the construction of infrastructures at Namanve Industrial park,” Stephenson added.

The Namanve Industrial and Business Park is the largest industrial park in Uganda, sitting on 2,200 acres of land. It currently has 40 fully operational industries, 100 are under various stages of development while 140 companies are under pre-start stages.

-1 #1 kibedi nkuutu 2020-01-22 01:13
This is good for business, of course. But what I find extremely disturbing is that rural roads are impassable, Kampala roads are in a mess, roads have been washed away by rains in the Bugisu and Western areas, but the government continuously says they can't get the money for those people.

But when it comes to this, it can borrow money and construct these roads. Is this the NRM policy when it comes to wanaichi? NRM always shouts that it is a movement for the people, but its true colors have been exposed this time.

Gen Wamala, what exactly are you up to? Don't you see the roads you travel on when going to your remote village? Infrastructure, Madame Anite, includes rural infrasture too. Get real you guys. Kampala is not Uganda!
Report to administrator