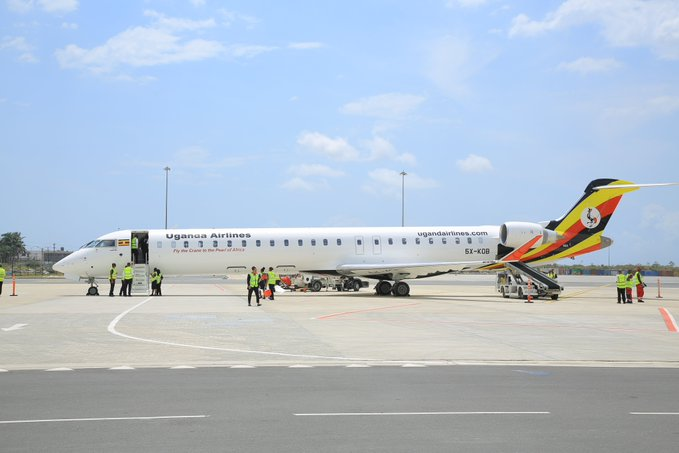 The revival of Uganda Airlines and Air Tanzania have raised the stakes for the aviation industry in the East African region as the two state-owned flag carriers fight for a slice of the sector currently dominated by international carriers, SADAB KITATTA KAAYA.

As Uganda Airlines launched two additional routes to Mombasa in Kenya and Tanzania’s Kilimanjaro International Airport, Tanzanian authorities were looking at possible partnerships with Uganda to cut out the possibility of unhealthy competition between the two countries’ airlines.

Uganda Airlines resumed commercial flights on August 28, almost three years after the revival of Air Tanzania in September 2016. But since the two airlines are fishing from the same pond for passengers on their regional routes, Atashasta Nditiye, Tanzania’s deputy minister of Works, Transport and Communications, suggests that the two airlines can complement each other with Uganda Airlines feeding Air Tanzania’s long-haul routes.

With two Airbus A220-300 and Boeing 787-8 Dreamliner in its fleet, Air Tanzania operates routes to Mumbai, India and Guangzhou, China, and plans to start flights to Thailand which are popular trade and tourism destinations for East Africans.

“Instead of competition, we can complement each other by Uganda Airlines flying passengers from its various destinations to Air Tanzania’s hub at Julius Nyerere International Airport, Dar-es-Salaam for Air Tanzania to take them to its long-haul destinations,” Nditiye said.

“We need to work together and empower Soroti flying school so that it builds capacity to train more pilots and other aviation personnel from the region,” Nditiye said.

Soroti Flying School, as is popularly known, was established by the East African Community (EAC) in the early 1970s. But with the collapse of the EAC in 1977, the school was taken over by the Ugandan government that has in recent years been struggling to keep it afloat.

With the revival of the regional bloc in 1999, ownership of the school became a major issue as partner states pushed to have the school’s ownership revert to the EAC. Nditiye’s proposals on the management of the flying school seemingly caused discomfort within the Ugandan delegation. To that effect, Aggrey Bagiire, Uganda’s state minister for Transport, told journalists that the Tanzanian minister spoke without information.

According to Bagiire, there are ongoing efforts by the Ugandan government to solve the issues that have for long dogged the operations of the flying school. For instance, Bagiire said, “President Museveni bought new aircraft” for the school that its fleet now has two twin-engine planes and seven single-engine planes.

Much as its fleet has improved, the school still struggles to get fuel to run the aircraft which might affect the students.

“We need more money for fuel because fuel is key in aviation. When students are training to get licensed, flight time is considered, and if there is no fuel for them to fly the planes, they may not progress,” Bagiire told The Observer.

The flying school’s runway is meanwhile in the process of being improved so that student pilots stop moving to Entebbe to train how to take off and land at night because the school has no runway lights.

+1 #1 rubangakene 2019-11-25 23:39
Interline coordination is a practice that can work well with 'good planning and management' by experienced persons, otherwise it can land either party in great losses.

Soroti Flying School has turned out number of excellent pilots, engineers and associated aviation personnel; the problem was that some people tried to "privatise" it.

For your information Mr. Bagiire, Museveni does not buy aircraft for the school, rather it is the government of Uganda that does that!
Report to administrator
+1 #2 Jomo 2019-11-26 11:14
Do not only look at partnering between Air Tanzania and Uganda Airlines, but work to revive the entire East African Airways urgently, as a survival strategy!

With onslaught from Ethiopian Airlines and South African Airways giant showing signs of re-awakening, i don't see our individual state airlines staying in the air for long.

Benchmark with Scandinavian Air Services (SAS) to have in place agreement that avoids the pitfalls that brought about the disintegration of previous EAA.
Report to administrator
+1 #3 Kelly 2019-11-26 16:20
According to Minister Bagiire, “President Museveni bought new aircraft” for the school... If there is anything that nauseates me it is this thing of alluding to M7 as government.

Since when has M7 started buying assets for the country if not stripping the country off them instead?

Uganda Grain Millers was handed over to his drunko half brother and all he did was to sell all the metals to scrap dealers and lease out the space for a warehouse.

He has prodded his favourite doll Natasha Karugire with so much government money but the girl is just empty upstairs for business.

Patience and Odrek have been handed the Tomosi dairy, Terp Consults (who still remembers the CHOGM advert scam of "gifted by nature" that failed miserably?).

She has even tried her hands on fake pastoring where elite "worshipers" are herded in every Sunday but still the "church" (or shrine) cant expand. The least said about Mohoozi, Diana the better.
Report to administrator