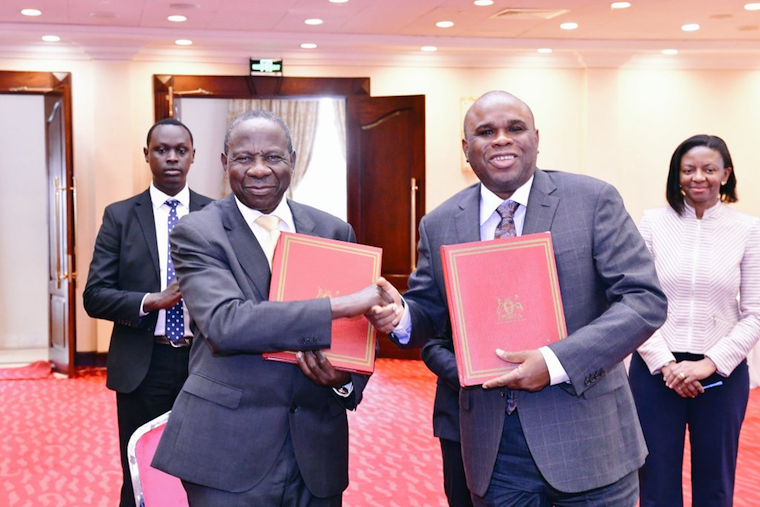 The African Export-Import Bank (Afreximbank) concluded the formalities for the take-off of its East Africa regional office in Kampala as it signed the two principal documents with the Uganda government at a ceremony witnessed by President Yoweri Museveni and former Nigerian President Olusegun Obasanjo.

Afreximbank president Prof Benedict Oramah and Philemon Mateke, the minister of State for Foreign Affairs in charge of regional affairs, signed the branch office agreement while Prof Oramah and Finance minister Matia Kasaija signed the Memorandum of Understanding (MoU) concerning the temporary and permanent premises of the East Africa branch office at State House in Entebbe.

Speaking after the signing, Museveni commended Afreximbank for choosing to establish the branch office in Uganda and promised the bank full government support to ensure its success.

Museveni said that through its provision of trade, finance and promotion of value addition to Africa’s commodities and products, Afreximbank was helping to address some of the major deficits confronting Africa, which he said was under-consuming and under-producing.

“If you don’t trade, you cannot grow,” he told the audience, highlighting that without trade, the economy would collapse as there would be no jobs and social problems would ensue.

Obasanjo said that the establishment of the Afreximbank East Africa branch office represented a significant advance in ensuring the provision and availability of trade finance in the East Africa region and in Uganda, describing Afreximbank as a typical example of a strong African institution.

He noted that the establishment of the branch office would boost the implementation of the African Continental Free Trade Area (AfCFTA), saying that the signing, ratification, and launch of the AfCFTA was one of the best things that have happened to Africa in recent times.

Earlier, Prof Oramah said that the establishment of the branch office represented a significant milestone in the annals of Afreximbank as the absence of a physical presence in the East Africa region had been a “yawning gap” in the bank’s vision for enhanced effectiveness in delivering its mandate in Africa.

He said that the establishment of the branch office had set the stage for deepening the bank’s operation across the 11 East African countries under its jurisdiction and expressed gratitude to the government of Uganda for agreeing to host it and for working so hard for the realization of that goal.

Kasaija said that Uganda stands to reap a number of benefits from the establishment of the branch office in Kampala, including increased export and import trade and enhanced access to credit facilities. It would also increase Afreximbank’s portfolio in Uganda and lead to job creation and expansion of credit liquidity in the country.

The ceremony was also attended by members of the Afreximbank board of directors, the management and staff of the bank as well as senior government officials. Afreximbank, which is headquartered in Cairo, currently has branch offices in Abidjan, Abuja, and Harare.