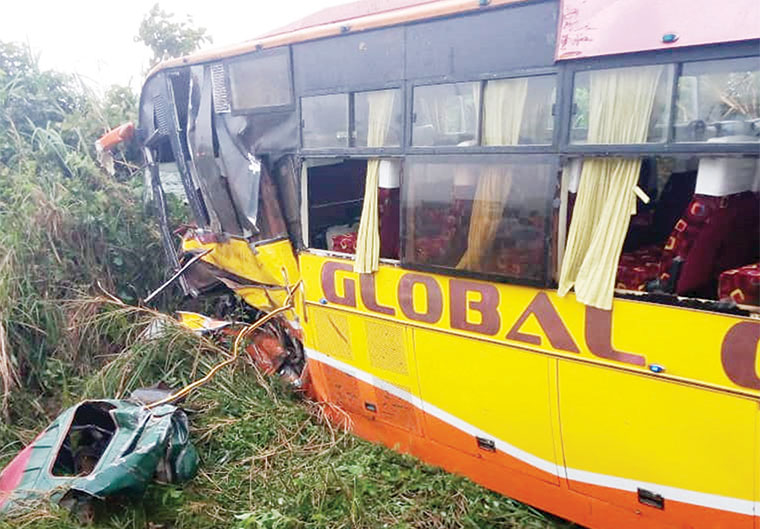 A bus rammed into a lorry killing some people and leaving others injured along the Kampala-Masaka highway just last week.

Another bus knocked down an elephant on the Karuma-Arua highway, images of which went viral online. If you travel regularly on our highways, you will never be surprised when a bus is involved in an accident.

Buses move at breathtaking speeds, overtake from anywhere – including blind spots – and have zero regard for other road users. When overtaking, they blow their train horns, making other motorists temporally deaf. At night, they drive with full lights on temporally blinding other road users.

Most bus drivers remind me of most boda boda riders. They don’t care about their lives and don’t even care about those of their passengers. The majority don’t obey traffic rules yet they are carrying many people.

It is in fact due to such reckless driving that Rotary Uganda and Nkozi hospital are building an accident and trauma centre in Nkozi. The accidents are simply too many. The biggest cause of accidents, according to the Uganda Bureau of Statistics, is careless driving.

According to a World Bank 2018 study, “the greatest share of mortality and long-term disability from road traffic crashes happen amongst the working-age population (between 15 and 64 years old).”

The High Toll of Traffic Injuries: Unacceptable and Preventable report further says that “deaths and injuries from road traffic crashes affect medium- and long-term growth prospects by removing prime age adults from the workforce, and reducing productivity due to the burden of injuries.”

A UN road safety performance report says that road accidents cost the economy 4.4 trillion each year or five per cent of the country’s GDP. These statistics may not mean a lot of sense to bus owners yet they need to put them into perspective because they are big players in this economy.

Some people argue that bus owners want to make as many trips as possible so they reduce on the amount of time needed to get their money back. Perhaps they even calculate the accident risks before allowing their drivers to drive as they wish.

In the long run, given the numbers of buses on most of these routes, it would still not make much sense because in a lot of cases many trips aren’t possible for each bus. For example, given the number of buses on the Kampala-Mbarara highway, I doubt that a single bus can make two round trips a day. The customers are simply not that many.

So, what I don’t fully understand is how bus owners have allowed their drivers to behave as they wish. Given the cost of a bus, you would think that bus owners would put systems in place to safeguard at least their investments. Insurance companies may pay them but I am not sure they compensate the business lost while the bus is in the garage or being replaced.

The majority of the buses on Ugandan roads are built in Nairobi and it takes some months to have one built. And that is when you have spent some nights in the workshops to ensure that they are focused on your bus, not some other customer.

So, if bus owners don’t care about the lives of people or wildlife, why don’t they care about their buses? Speed governors have been on the market for ages and indeed buses once installed them. Once traffic police stopped checking, they disconnected them. Where they are available, the drivers put the buses in the neutral gear while slopping so they can move faster.

Vehicle tracking technologies are available which can actually tell in real time the speed a particular bus is moving, enabling owners to reprimand the drivers. A bus company can even see the behaviour of a driver in real time. It would reduce accidents and actually fuel costs.

Speeding and sudden braking consume a lot of fuel. Most bus owners probably have no idea what technology can do for them. In the comfort of their offices, bus owners can stop a bus that is driving at an unacceptable speed limit. They can do a lot of monitoring which can save a lot of lives and make them money.

0 #1 kabayekka 2019-06-13 20:21
Great for this writer to have made out some major points that is killing the travelling public in Africa at the rate of about 10 people every week.

Modern thinking these days has got it that if you as a transporter of the public want people to leave their private mobilities and come over to your movement systems, you must have a transport system that they can see as best, cheaper and safer and faster.

That is why there is now underground trains and some planners are thinking of several storeyed motorways that cross cities.

Unfortunately for Uganda, such a scenario is in the 21st century when many African people will have died through unnecessary road accidents
Report to administrator
0 #2 Robert Atuhairwe 2019-06-18 20:42
Passengers only survive because drivers themselves fear to die but if they were "immune", sitting in a safe canopy they wouldn't mind wrecking 60s of lives and the machines
Report to administrator
+1 #3 Wainainchi 2019-06-20 03:09
May I add one more comment which has relevance with road disasters.

Just today we are reading in New Vision that defense patrols caught two criminals who were sabotaging fences along Kampala Entebbe road.

These Ugandans are not happy and proud with what was done for them but the same as thugs destroying electricity poles are rats destroying good things Uganda achieved for Uganans.

This is criminal act tantamount to treason and they should be treated as terrorists and put before the firing squad.What other punishment they deserve than capital offenc_ death.Down with saboteurs and terrorists
Report to administrator